Lawrence Hill is an electoral ward of Bristol, United Kingdom and includes the districts of Barton Hill, St Philips Marsh and Redcliffe, Temple Meads and parts of Easton and the Broadmead shopping area. Lawrence Hill takes its name from a leper hospital dedicated to St Lawrence, which was founded by King John.

It is one of the most deprived electoral wards in the south west region of England, was part of the Bristol European Union Objective 2 area, and had a New Deal for Communities project within its boundaries. In 2013 the City Academy Bristol secondary school opened in the area. The Bristol and Bath Railway Path starts in the south of the ward.

Lawrence Hill takes its name from a leper hospital dedicated to St Lawrence, which was founded by King John in 1208 when he was Earl of Mortain. The hospital was located somewhere in the vicinity of Lawrence Hill roundabout. The right to appoint the master was held by the Crown until it was granted to Humphrey, Duke of Gloucester during the reign of Henry V (1413–22). The Hospital of St Lawrence was never rich, and by the mid 15th century it had fallen into decay. In 1465 the hospital was granted to the Dean and Chapter of Westbury College, and it remained in their possession until it was surrendered to the Crown in 1544. In 1544 the properties of Westbury College, which included the Hospital of St Lawrence, were confiscated by the Crown, then sold to Sir Ralph Sadlier, who re-built the hospital as a mansion house. The estate remained in the hands of the Sadlier family until at least 1608 . Queen Elizabeth I stayed at St Lawrence during her visit to Bristol in 1574, which suggests that the mansion was probably a substantial building, but by the 18th century it was in ruins. Today the exact location of the hospital remains unknown.

During the post-medieval period Bristol gradually expanded beyond its medieval walls and by the early 18th century there was a significant amount of development along the main east-west road through Lawrence Hill. During the 18th and early 19th centuries the land to the east of Bristol was characterised by market gardens and nurseries interspersed with industrial operations such iron, lead, glass and brick works, potteries and coal mines. Industrialisation of the area led to an increase in population, and by the early 19th century Lawrence Hill had become a suburb of Bristol. The main road through Lawrence Hill was one of the first to be re-surfaced with John Macadam's revolutionary new ‘Macadamisation’ process, which he undertook soon after he was appointed surveyor of the Bristol Turnpike Trust in 1816.

Holy Trinity is a church that is located on the corner of Trinity Road and Clarence Road, which was built in 1829-32 by Thomas Rickman and Hutchinson. Later alterations were carried out c 1882 by John Bevan and in 1905 by William Venn Gough. 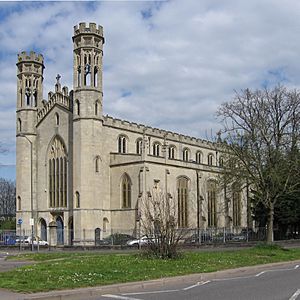 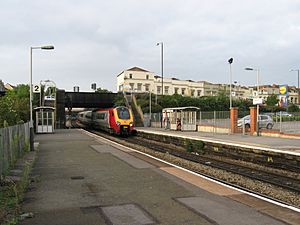 All content from Kiddle encyclopedia articles (including the article images and facts) can be freely used under Attribution-ShareAlike license, unless stated otherwise. Cite this article:
Lawrence Hill, Bristol Facts for Kids. Kiddle Encyclopedia.