Staple Hill was one of many hamlets of the parish and village of Stapleton which was a highly wooded village that developed railways and industries in the 19th century and Staple Hill is divided between the ecclesiastical parishes of surrounding areas.

Staple is a rendering of the Anglo-Saxon/Old English word stapol or staypole which meant a post in the sense of an old boundary marker. The actual settlement of Staple Hill developed as late as the early 17th century, prior to that it was only shown on maps as a landmark.

Development of the suburb and community The modern settlement of Staple Hill originated in the 18th century by when forest law had become largely anachronistic and the wild boar and wolves which once made the forest dangerous were long since extinct (see Royal Forest). Expansion of the settlement was facilitated after 1888 when the Midland Railway line gave Staple Hill direct access to Bristol and Gloucester and access to a railway network that extended from London to York. The Bristol-to-Bath line of the Midland Railway involved the construction of a beautifully engineered tunnel deep under the hill at Staple Hill. After this investment, Staple Hill grew beyond a small hamlet and gained tram and bus links with Bristol that allowed it to become a residence for commuters to Bristol or Bath. 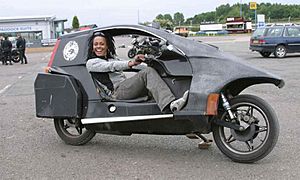 Broadcaster Jane Omorogbe in a Quasar

In the 20th century, Staple Hill benefited from the construction of Bristol's ring-road and the M4 and M5 motorways. Staple Hill also briefly became a center for engineering with Wilson and Sons Engineering designing and assembling Quasar (motorcycle)s. This was a recumbent motorcycle built in small numbers which is today widely recognised as the first modern feet-forward motorcycle design.

Staple Hill has a wide-ranging high street and the architecture is largely Victorian with ornate roof ridges and eaves, attractive decorative brickwork and architectural features in stonemasonry. The High Street is broad as trams originally ran along its length.

Page Park, which has been improved by volunteers from the community in recent years and celebrated its 100-year anniversary in 2010.

An event known as "Christmas on the Hill" takes place in December during which a fancy-dress parade is held, with music, floats, treasure hunts and entertainment.

Staple Hill was served by its own station, on the Bristol branch of the Bristol and Gloucester Railway. However, the line was part of Dr Beeching's railway closures in the 1960s. The railway line and the station site has been converted to the Bristol & Bath Railway cycle route, one of the Sustrans National Cycle routes. For a minor section in the central part of the ward, the path runs through Staple Hill tunnel as the land rises in this section, allowing for the hill above.

All content from Kiddle encyclopedia articles (including the article images and facts) can be freely used under Attribution-ShareAlike license, unless stated otherwise. Cite this article:
Staple Hill, Gloucestershire Facts for Kids. Kiddle Encyclopedia.