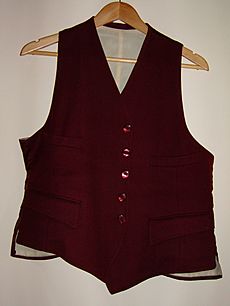 A traditional waistcoat, to be worn with a two-piece suit or separate jacket and trousers. 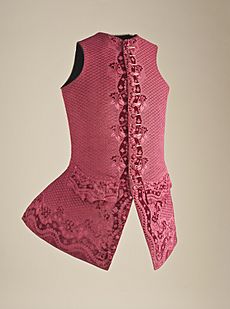 French waistcoat in silk, circa 1750, LACMA.

A waistcoat (U.S. = vest) is a sleeveless upper-body garment. It is worn over a dress shirt and necktie, and below a coat as a part of most men's formal wear. It is the third piece of the three-piece male suit.

The waistcoat has quite a long history, going back to King Charles II. It was derived from the Persian vests seen by English visitors to the court of Shah Abbas.

As an item of clothing, the waistcoat has the advantage that if the jacket is taken off indoors, the outfit still keeps a degree of formality.

All content from Kiddle encyclopedia articles (including the article images and facts) can be freely used under Attribution-ShareAlike license, unless stated otherwise. Cite this article:
Waistcoat Facts for Kids. Kiddle Encyclopedia.