St Stephen's Church in St Stephen's Avenue, is the parish church for the city of Bristol, England.

It has been designated by Historic England as a grade I listed building.

Black and white engraving of St Stephen's Church, Bristol, UK, published c.1838. The view is from the south east of the church, showing the body of the church on the right of the image and the distinctive tall, thin tower in the centre. In front of the church can be seen two horses and carts. From 1240 to 1892 the Bristol Harbour was on the opposite side of the church when it was filled in.

It was built, on the site of an 11th-century church, in the 14th century and rebuilt around 1470. The tower and east window were paid for by John Shipward, four times Mayor of Bristol, who died in 1473, the tower being built by the mason Benedict (or Benet) Crosse. The site was on the banks of the River Frome, which was diverted at around this time to create Bristol Harbour. The clerestory was repaired after a storm in 1703. The aisle and east windows were restored in 1873.

The tower measures approximately 18 ft by 20 ft at its base, and rises to a total height of 152 ft. It originally contained six bells but these have been replaced over the years and the number increased to twelve. The tower is typical of Somerset churches, but with the addition of a "Gloucestershire crown" of arcaded battlements, pinnacles and open-work arcading.

The 15th-century brass eagle lectern and the iron sword rest by William Edney of about 1710 were moved to St Stephen's from St Nicholas church, which was damaged in the Bristol Blitz.

The St Stephen's Ringers have been a continuously active group of bellringers since 1574, and have met annually at The Red Lodge since 1920 for their ceremonial dinner. 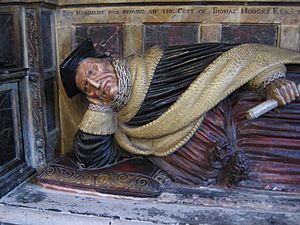 Edmund Blanket, a 14th-century clothier and wool merchant, has a tomb on the north side of the church.

Another significant tomb is that of Martin Pring, who died at the age of 46 in 1627. He was a navigator, explorer and merchant and discovered what is now called Cape Cod Bay. The monument is draped with painted mermaids and mermen and verses to his exploits.

Sir Walter Tyddesley, who died in 1385, and Sir George Snygge also have ornate tombs in the church.

Also commemorated, but this time in a wall-mounted plaque, is Robert Kitchin, who died in 1594, a donor of one of the famous "nails" found outside The Exchange in Bristol.

All content from Kiddle encyclopedia articles (including the article images and facts) can be freely used under Attribution-ShareAlike license, unless stated otherwise. Cite this article:
St Stephen's Church, Bristol Facts for Kids. Kiddle Encyclopedia.