The Red Lodge Museum (grid reference ST582731) is a historic house museum in Bristol, England. The original building was Tudor/Elizabethan, and construction began in 1579–1580, possibly to the design of Sebastiano Serlio. The main additional building phases are from the 1730s and the early 19th century.

The Red Lodge is a free museum but runs on donations, and is managed as a branch of Bristol City Council.

The museum is open from 1 April to 31 December on Saturdays, Sundays, Mondays and Tuesdays, 11 am – 4 pm. 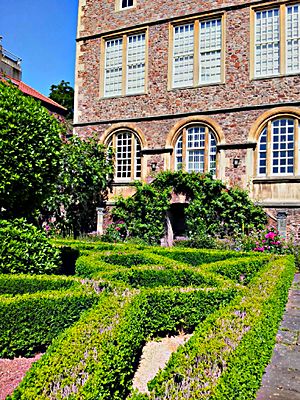 The Red Lodge Museum has an Elizabethan Knot Garden.

John Young and the Great House

The Red Lodge was originally built at the top of the gardens of "ye Great House of St. Augustine's Back". The Great House was built in 1568 on the site of an old Carmelite Priory by John Young/Yonge, the descendant of a merchant family and courtier to Henry VIII and Elizabeth I, now the site of Colston Hall.

The Red Lodge would have originally been used as a guest house and entertainment pavilion, so that the Young family could promenade their guests through their eight ornamental gardens and orchards to wine and dine them.

John Young died in 1589, and the Red Lodge was completed in 1590 by his widow Dame Joan. Dame Joan, from an old Somerset and Devon family, was a sister and co-heiress of Nicholas Wadham co-founder with his wife Dorothy Wadham of Wadham College, Oxford, and is buried in a beautiful altar tomb at the entrance to Bristol Cathedral, which commemorates her and both her husbands. She was married firstly to Sir Giles Strangways (1528-1562) of Melbury Sampford and then in 1546 to John Young (16th-century MP), who was knighted in 1574 by Queen Elizabeth I when she stayed with the Youngs at The Great House on her visit to Bristol, and the arms of Young impaling Wadham are carved above the porch entrance to the Great Oak Room at the Red Lodge.

Their son, Robert Young inherited the entire estate. Robert quickly spent his inheritance and had to convey the Red Lodge to his half-brother Nicholas Strangeways to avoid seizure. By 1595, the building was rented out to various tenants as a residence separate from the Great House. Robert Young eventually sold the Great House to Sir Hugh Smyth of Ashton Court.

In the 1730s, John and Mary Henley bought the Red Lodge and started major extension work on the north side, doubling the footprint of the building, fitting large Georgian windows, and rebuilding with hipped roofs and eaves, and cornices replacing gables, giving a full-height second floor.

The Henley’s refurbished the Reception Room and part-refurbished the Parlour, leaving some original panelling and the original decorated ceiling, but made minimal changes to the Great Oak Room, Small Oak Room and Bedroom, leaving the rich Tudor decoration largely untouched.

Before the end of the extension work, John Henley died, leaving Mary Henley childless and unable to inherit. John wrote into his will that Mary had the right to live in the Red Lodge for one month in every year. This meant that the building could not be leased out long-term or sold to a new owner.

After the Henleys died the Red Lodge was leased to tenants practising medicine working at the Bristol Royal Infirmary, including James Cowles Pritchard who wrote Researches into the Physical History of Man, and Francis Cheyne Bowles and Richard Smith, who used the Great Oak Room as a dissection theatre. In the 19th century, the current entrance to the building from Park Row was added, as well as the rooms to the East of the original core.

In 1854 the building was bought by Lady Byron, using Lord Byron’s endowment and given to Mary Carpenter to use as a school. Mary Carpenter was a zealous reformer and founded the first ever Girls’ Reformatory at the Red Lodge to encapsulate her radical and progressive ideas of improvement and nurture for the nation’s poor, in contrast to the harsh workhouses and prisons which were the common solution in the Victorian Era.

The Red Lodge was used as a Reform School until 1917, during which time Carpenter used her standing as Superintendent to lobby parliament and travel the world researching the plight of ‘pauper children’.

In 1919, James Fuller Eberle saved the Red Lodge’s historic interior from being pulled apart and sold piecemeal by buying the building for the Bristol Savages and the Bristol Corporation. The Savages couldn’t cope with the upkeep of the whole historic building, so CFW Dening built the Wigwam in the garden in 1920 and converted the Victorian Laundry into their studio, leaving the bulk of the Tudor, Georgian and Victorian building to the Corporation, which became Bristol City Council.

The Council renovated the building once in 1920 and again in 1956 before opening the Red Lodge as a museum. From then onwards the building has been a branch of the Bristol City Museum and Art Gallery, along with Georgian House, Blaise Castle House, Kings Weston Roman Villa and MShed.

The next stages of development at the Red Lodge Museum are reinstating the fixtures of the New Oak Room and including interpretation for the well which was discovered; and re-ordering the garden paving to make it safe for visitors to enjoy. 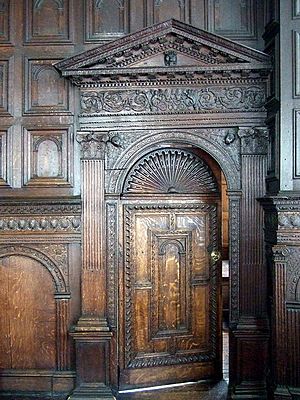 The Great Oak Room retains its original oak panelling, moulded plaster ceiling and 'double-decker' fireplace, making it "one of the finest rooms in the West Country". Entrance is via an oak internal porch, similar to that of Montacute House. The only features which have changed since the room was built are the enlarged Georgian windows, giving a view onto the knot garden.

The Small Oak Room and Bedroom

The Small Oak Room and Bedroom are contemporary with the Great Oak Room but much less richly panelled. The Bedroom has the moulded plaster ceiling upon which the knot garden’s design is based. The common layout of Tudor rooms in an apartment with people travelling from most public to most intimate suggests that the Great Oak Room was the most public room whilst the Small Oak Room and Bedroom were more private antechambers, possibly bedrooms and cabinets.

The Print Room is part of the 18th-century extension of the Lodge and has been renovated by the Museum to look like a typical Print Room of the period. The collection of tiles around the fireplace, examples of marquetry and parquetry in the furniture and the ‘japanned’ grandfather clock represent the fashion of the early eighteenth century.

The grand Georgian staircase and landing display portraits of notable people linked with the house – John and Mary Henley, Robert Yeamans, Robert Poyntz, Florence Poulett, William Herbert, the Third Earl of Pembroke, and Col. Adrian Scrope. The staircase was designed with as many windows as possible and nobly proportioned, with a grand chandelier to illuminate Mary Henley and her guests as they processed into the Reception Room.

The New Oak Room and the Well

The New Oak Room was extensively altered in the nineteenth century, and in 1965 the museum re-used older fixtures and fittings from other sites to decorate the room. The panelling is pre-18th century, bought from the Refectory of St Michael-on-the-Mount, and the mantelpiece and fire surround from Ashley Down House.

The Tudor gabled attic was extended into a full-height second floor by the Henleys.

Portrait of Queen Elizabeth I

The Portrait of Queen Elizabeth I is in the Great Oak Room. It has recently been assessed as an original, painted in the late 16th century.

The chair in the Great Oak Room folds down so that the back turns into the table-top. Hybrid furniture was not uncommon in the Tudor period (i.e. Chests used as tables and chairs). The Speke family are an aristocratic family from near Ilminster, Somerset.

Portrait of Florence Smyth and her black "Page" 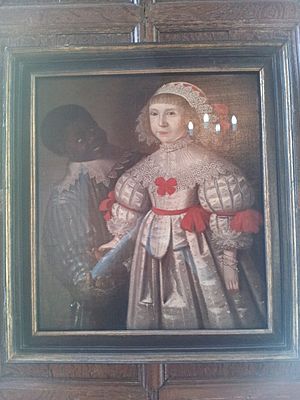 Portrait of Florence Smyth and Black 'Page' by Gilbert Jackson

In the Small Oak Room is a portrait of Florence Smyth, of the Smyth Family and her black ‘page’. There is no information on the identity of the boy in the portrait, so it can't be said whether the boy is a slave, a servant, or a peer of Florence's. If the boy is a slave then it is probably the earliest depiction of a slave in the UK.

The piano in the Mary Carpenter Room is the original Broadwood piano bought by Mary Carpenter in 1845. The fabric panel on the front of a Broadwood is usually made from silk, so it is possible that the fabric and embroidery on this one were a project for the school girls.

The Walnut Bureau and shelves in the Reception Room hide multiple hidden compartments. 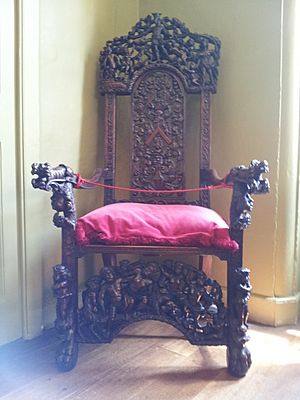 The Skinner chair with 'Actaeon' frieze

The Skinner Chair in the Parlour was carved for Bishop Robert Skinner in the late 17th century. The story told in the relief is that of Actaeon the Hunter who angered Artemis and was punished by being turned into a deer and attacked by his own hunting party.

The back of the chair also carries the Arms of the Skinner family. The same Arms (impaled) are also featured on his grave in Worcester Cathedral.

The chair has been used on two royal occasions – Prince Albert sat on it in 1843 when he visited Bristol to launch Brunel's ship, the SS Great Britain, and Edward VII sat on it in 1908 when the Edward VII Dock was opened. 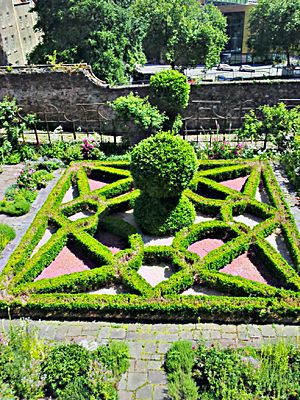 The Garden viewed from the Parlour and Great Oak Room is a 1980s interpretation of an Elizabethan Knot Garden. The box hedge 'knot' is copied from the design incorporated into the ceiling of the Bedroom. Herbs and flowers are mixed together in beds as was the fashion in the 1630s, and all the plants used would have been common in a similar garden of the period. The trellis is copied from a French seventeenth century design.

In 2006, Bristol City Council, Arts Council England and Bristol Museum and Art Gallery partnered with Plan 9 for a one-off modern sculpture exhibition at the Red Lodge.

Responding to the building, the selected artists take on board sensitivities of politics past, ongoing preservation, and today's nervy ambiguities. The works contrast and compliment the architecture and decoration of the Red Lodge but none sit too comfortably, and the friction they create subtly transforms this Elizabethan house.

The Ithaca Axis performed a roaming piece of theatre, parts of which were set in the Great Oak Room and the Garden. In 2013, Galliard Films made an online documentary as a fun, informal way of looking into some of the history of the Red Lodge.

On 10 February 2016, the Red Lodge was used in the BBC Four documentary Queen Elizabeth I: A Timewatch Guide with shots of Vanessa Collingridge in the Reception Room, Great Oak Room, and knot garden.

All content from Kiddle encyclopedia articles (including the article images and facts) can be freely used under Attribution-ShareAlike license, unless stated otherwise. Cite this article:
Red Lodge Museum, Bristol Facts for Kids. Kiddle Encyclopedia.