Bristol Museum & Art Gallery is a large museum and art gallery in Bristol, England. The museum is situated in Clifton, about 0.5 miles (0.8 km) from the city centre. As part of Bristol Culture it is run by the Bristol City Council with no entrance fee. It holds designated museum status, granted by the national government to protect outstanding museums. The designated collections include: geology, Eastern art, and Bristol's history, including English delftware. In January 2012 it became one of sixteen Arts Council England Major Partner Museums.

The museum includes sections on natural history as well as local, national and international archaeology. The art gallery contains works from all periods, including many by internationally famous artists, as well a collection of modern paintings of Bristol.

In the summer of 2009 the museum hosted an exhibition by Banksy, featuring more than 70 works of art, including animatronics and installations; it is his largest exhibition yet. It was developed in secrecy and with no advance publicity, but soon gained worldwide notoriety.

The building is of Edwardian Baroque architecture and has been designated by English Heritage as a grade II* listed building.

Bristol Museum & Art Gallery run a programme of free and paid events throughout the year that include multi week exhibitions, workshops and drop in gallery curator talks. The biggest annual event is the weekend celebration for Chinese New Year during February which has dancing dragon and lion performances, martial arts, traditional Chinese dances, storytelling, family trails, arts and craft activities. Information on current and past events can be found on the museum's website. 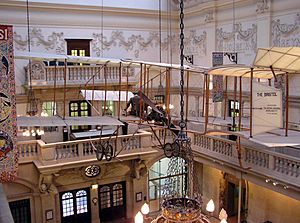 A Bristol Biplane replica hangs from the ceiling of the main hall of the Museum. This aircraft was made in 1963 for the film Those Magnificent Men in their Flying Machines. 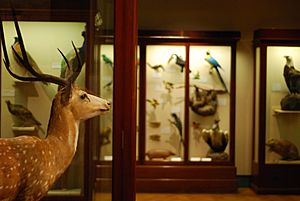 Sarcophagi in the Egyptology collections 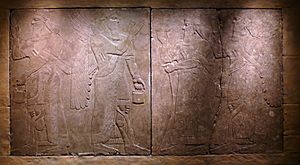 The Museum and Art Gallery's origins lie in the foundation, in 1823, of the Bristol Institution for the Advancement of Science and Art, sharing brand-new premises at the bottom of Park Street (a 100 yards (91 m) downhill from the current site) with the slightly older Bristol Literary and Philosophical Society. The neoclassical building was designed by Sir Charles Robert Cockerell (1788–1863), who was later to complete the Fitzwilliam Museum, Cambridge, and build St. George's Hall, Liverpool, and was later used as the Freemasons Hall.

In April 1871 the Bristol Institution merged with the Bristol Library Society and on 1 April 1872 a new combined museum and library building in Venetian Gothic style was opened at the top of Park Street. The lease on the former Bishop's College building next door, which had been the Library Society's home since 1855, passed to the local army reserve unit, whose drill hall lay behind it; it became the Victoria (later Salisbury) Club and a restaurant. The old Institution building was sold to the Freemasons. Although the new building was extended in 1877, by the 1890s the Museum and Library Association was struggling financially, and even unable to pay its curator, Edward Wilson (1848–1898). Negotiations with the city corporation culminated in the transfer of the whole organisation and premises to Bristol city corporation on 31 May 1894. Wilson remained Curator until his death – only this time he was actually paid!

However, in June 1899 the site of the Salisbury Club was offered for sale to the city, the tobacco baron, Sir William Henry Wills (1830–1911, later Lord Winterstoke) offering £10,000 to help buy the site and build a new City Art Gallery on it. Designed by Frederick Wills in an Edwardian Baroque style work on the new building started in 1901, and opened in February 1905. It was built in a rectangular open plan in 2 sections each consisting of a large hall with barrel-vaulted glazed roofs, separated by a double staircase. It incorporated a Museum of Antiquities, as it had been decided during the planning stage that Assyrian, Egyptian, Greek and Roman antiquities should be grouped with art in the new structure, rather than remaining with the natural history collections that remained in the old building. Stone tools continued to reside with the geology collections within natural history. Yet more space became available to museum displays when Bristol Central Library moved down the hill to College Green in 1906. The vacant rooms were reconstructed as invertebrate and biology galleries.

In 1913, the army reserve's drill hall, which now lay between the rear of the Art Gallery and the rapidly expanding University of Bristol, was purchased by the two institutions, three-fifths of the complex falling to the Museum and Art Gallery, the rest to the University. Unfortunately, the outbreak of war in 1914 put paid to any plans for new building; indeed, the Upper Museum Room (geology) was cleared in 1916 to become a 'Soldiers Room' to entertain convalescents and the Egyptian Room 'served for reading and writing and for the delivery of special demonstrations. However, after being used for storage for over a decade, it proved possible to demolish the Drill Hall to permit a rearward extension of the Art Gallery. This was funded by Sir George Alfred Wills (1854–1928, a cousin of Lord Winterstoke) and completed in 1930.

The 1872–77 Museum building was gutted by fire following a bomb hit on the night of 24–25 November 1940, during the Bristol Blitz, some 17,000 of the natural history specimens being lost. The 1930 extension of the Art Gallery was also hit, but luckily escaped the conflagration, although suffering badly from blast damage. Nevertheless, the Art Gallery partially reopened in February 1941, now also housing some of the Museum's surviving material on a 'temporary' basis. Although now housed in the same building, from April 1945, the Museum and Art Gallery were formally split into separate institutions with the lower floor becoming the Museum and the upper floors the Art Gallery. As part of this restructuring, the archaeology and anthropology collections were transferred from the Art Gallery to the Museum.

In February 1947, the remains of the old Museum building (with the exception of the undamaged lecture theatre) were sold to Bristol University: it was then rebuilt as its dining rooms, later becoming Brown's Restaurant. The sale of the building in 1947 reflected the intention that new premises would soon be provided for the Museum and the Art Gallery; planning began in 1951, but then dragged on for the next twenty years, during which time the old buildings received minimal attention, other than the insertion of mezzanines to gain additional space.

Meanwhile, various proposals had been made for new museum buildings in Castle Park, in the very centre of Bristol, overlooking the river Avon. However, spiraling costs and funding difficulties meant that in 1971 the plans were abandoned and a smaller amount of money was put into upgrading the existing building. Wholesale refurbishment was required, including rewiring, rearranging offices, creating laboratories and dividing up and furnishing the basement to provide proper storage for the reserve collections.

In the summer of 2009 the museum hosted an exhibition by Banksy, called Banksy versus Bristol Museum featuring more than 70 works of art, including animatronics and installations; it is his largest exhibition yet. It was developed in secrecy and with no advance publicity. 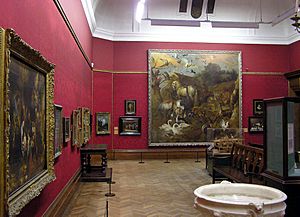 Interior of Bristol Art Gallery. The large picture Noah's Ark (4 m by 4m) was painted in c.1710 by the Dutch artist Jan Griffier.

Today, the top floor art galleries include a collection of Chinese Glass and the "Schiller collection" of Eastern Art donated by Max Schiler, the Recorder of Bristol from 1935 to 1946 and collected by his older brother Ferdinand N Schiler. It contains a range of Chinese ceramics wares spanning different dynastic periods. Particularly fine pieces include a number of white, light blue and green-glazed (Ying Qing and Qingbai) wares from the Tang (AD 618–960) and Song (AD 960–1279) dynasties. It also holds a collection of Bristol blue glass.

The Egyptology gallery contains mummies besides other items and a wall decoration made over 3,000 years ago – the Assyrian Reliefs, which were transferred from the Royal West of England Academy. It also has a significant collection of Egyptian antiquities, a considerable number derived from the excavations of the Egypt Exploration Society and British School of Archaeology in Egypt. A completely rebuilt Egyptian gallery opened in 2007.

A natural history gallery contains examples of aquatic habitats in the south west of England and an interactive map of local wildlife sites and a freshwater aquarium containing fish typical of the region.

The museum also holds many of the prehistoric and Roman artefacts recovered before the flooding of Chew Valley Lake, and other local archaeological finds such as those from Pagans Hill Roman Temple and the Orpheus Mosaic from Newton St Loe.

There is a choice of galleries situated upstairs full of artworks: Old Masters, French School, British Collection, Modern Art and the Bristol School.

In 2012, the museum was given the entire 50,000 piece collection of the former British Empire and Commonwealth Museum.

Other museums and sites administered by Bristol Culture are M Shed, Blaise Castle House Museum, the Red Lodge Museum, the Georgian House Museum, Bristol Archives and Kings Weston Roman Villa. The Bristol Industrial Museum, which closed in 2006 reopened in June 2011 as a museum called M Shed dedicated to telling the story of Bristol.

All content from Kiddle encyclopedia articles (including the article images and facts) can be freely used under Attribution-ShareAlike license, unless stated otherwise. Cite this article:
Bristol City Museum and Art Gallery Facts for Kids. Kiddle Encyclopedia.