The Cabot Trail viewed from the Skyline Trail 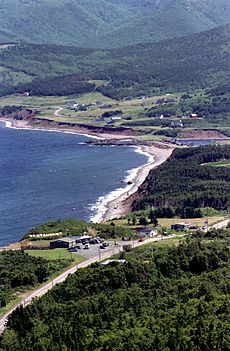 View of the commercial and residential establishments that exist at Pleasant Bay, along the Cabot Trail's northernmost segment

The Cabot Trail is a highway and scenic roadway in northern Victoria County and Inverness County on Cape Breton Island in Nova Scotia, Canada.

The route measures 298 km (185 mi) in length and completes a loop around the northern tip of the island, passing along and through the Cape Breton Highlands. It is named after the explorer John Cabot who landed in Atlantic Canada in 1497, although most historians agree his landfall likely took place in Newfoundland and not Cape Breton Island. (Premier Angus L. MacDonald attempted to re-brand Nova Scotia for tourism purposes as primarily Scottish and, as part of this effort, created both the names Cape Breton Highlands and Cabot Trail). Construction of the initial route was completed in 1932.

Its northern section of the Cabot Trail passes through Cape Breton Highlands National Park. The western and eastern sections follow the rugged coastline, with views of the ocean. The southwestern section passes through the Margaree River valley before passing along Bras d'Or Lake. 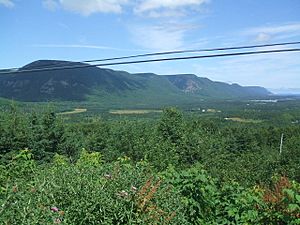 All content from Kiddle encyclopedia articles (including the article images and facts) can be freely used under Attribution-ShareAlike license, unless stated otherwise. Cite this article:
Cabot Trail Facts for Kids. Kiddle Encyclopedia.