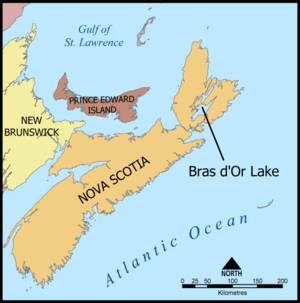 Bras d'Or Lake ( BRƏ-dor or BRAD-or) is an inland sea, or large body of partially fresh/salt water in the centre of Cape Breton Island in the province of Nova Scotia, Canada. Bras d'Or Lake is sometimes referred to as the Bras d'Or Lakes or the Bras d'Or Lakes system; however, its official geographic name is Bras d'Or Lake, as it is a singular entity. Canadian author and yachtsman Silver Donald Cameron describes Bras d'Or Lake as "A basin ringed by indigo hills laced with marble. Islands within a sea inside an island." The lake is connected to the North Atlantic by natural channels; the Great Bras d'Or Channel north of Boularderie Island and the Little Bras d'Or Channel to south of Boularderie Island connect the northeastern arm of the lake to the Cabot Strait. The Bras d'Or is also connected to the Atlantic Ocean by means of a lock canal completed in 1869—the St. Peters Canal, at the southern tip of the lake.

There are several competing explanations of the origin of the name "Bras d'Or". The most popular is that the first Europeans to discover and subsequently settle the area were French, naming the lake Bras d'Or, meaning "arm of gold"; this likely referring to the sun's rays reflected upon its waters. However, on the maps of 1872 and earlier, the lake is named "Le Lac de Labrador" (or more simply "Labrador"), and this is more likely the true derivation of the present name. The literal meaning of Labrador is "Laborer." A 1922 edition of Place-Names of the Province of Nova Scotia quotes a paper by a Dr. Patterson prepared for the Nova Scotia Historical Society, referring to his analysis that the name Bras d'Or came from the Breton form of Bras 'd'eau, literally an "arm of water", as it is an arm of the sea. The Mi'kmaq Nation named it Pitu'pok, roughly translated as "long salt water". An excellent review of this subject is given on page 93 and 94 of a work by J.G. Bourinot who was the President of the Royal Society of Canada.

Covering an area of approximately 1,099 square kilometres (424 sq mi) Bras d'Or Lake measures roughly 100 kilometres (62 mi) in length and 50 kilometres (31 mi) width. The maximum depth is 287 metres (942 ft) in the St. Andrews Channel. Surrounded almost entirely by high hills and low mountains, the lake is dominated by the Washabuck Peninsula in the centre-west, Boularderie Island in the northeast, and a large peninsula extending from the centre-east dominated by the Boisdale Hills. The Washabuck Peninsula and Boisdale Hills divide the lake into northern and southern basins, linked by the 1 km wide Barra Strait.

This area was designated the Bras d'Or Lake Biosphere Reserve by UNESCO in 2011. 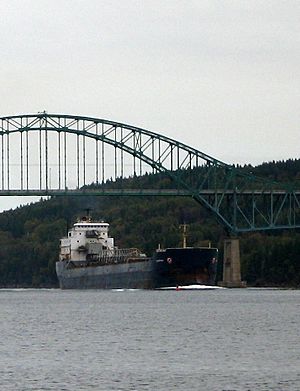 The effect of local topography has resulted in the following major components of Bras d'Or Lake:

The largest part of the lake measures approximately 25 kilometres across in the southern basin, framed by East Bay and West Bay with Denys Basin to the north and St. Peters Inlet to the south. The Barra Strait is crossed by highway and railway bridges running between the Washabuck Peninsula and the Boisdale Hills.

The following major rivers empty into the lake (which can also be defined as an inland sea, or a gulf):

The restricted tidal exchange in its three points of contact with the Atlantic ocean, coupled with significant freshwater drainage from the many rivers and streams in the lake watershed, cause the lake water to have less salinity than the surrounding ocean. Although salinity varies throughout the lake system, it approximates a one third fresh, two-thirds sea water mixture, and hence may be termed brackish water. Without much exchange with the ocean outside the island, the lake water quality is threatened by runoff from human activities in the surrounding watershed, especially from sewage treatment plants and septic tanks, ocean-going ships and small craft plying the lake system. Partly for this reason, the lakes were designated a UNESCO Biosphere Reserve.

The Bras d’Or Lake remained "virtually" ice free during the 2020/2021 winter (other than sparse coverage in a few areas) which raises the question on how this large lake may influence areas close to it during future winters (if this warming trend continues). Given its size, its heat capacity is quite large. Similar influences on climate could be comparable to those seen with Lake Constance in Germany if this lake continues to remain ice free during future winters. Its salt content, although not as high as the nearby Atlantic Ocean, helps it resist ice formation. Pairing this with the drastic reduction in ice formation observed for the Gulf of St. Lawrence for 2021, Cape Breton winters may be moderated to a much greater extent if this low ice condition trend continues.

Bras d'Or Lake is home to an array of wildlife with successful lobster and oyster fisheries, as well as the pursuit of other marine species. The lake's largely undeveloped shorelines have resulted in significant concentrations of bald eagle populations.

A renowned summer vacation destination, the area around the Bras d'Or Lake has become popular with recreational boaters. As the majority of cruising vessels enter the lake from the south via Lennox Passage and the St. Peters Canal, St. Peter's Lion's Club Marina located in Strachan's Cove (about 900 metres west of the Canal) in St. Peter's, Nova Scotia is the generally the first port of call for boats entering the lake. St. Peters Marina is one of the largest marinas in the Bras d'Or and has full boating services. Baddeck is home to two marinas, two full service boatyards and the Bras d'Or Yacht Club. Ben Eoin, in the East Bay, has a 75-slip marina with full services which opened in May 2013. The community operated Barra Strait Marina in Grand Narrows reopened in 2012. 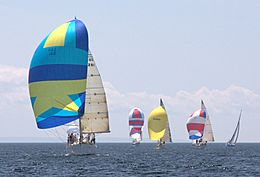 The East Bay Regatta, held the last weekend in July since 1984, features races and other social events. As many as 40 boats participate.

Sailboat racing is a long tradition in the Bras d'Or, with the various yacht clubs around lake hosting annual Regattas and race weeks. Regatta Week hosted by the Bras d'Or Yacht Club has been an annual tradition for over 100 years. The East Bay Regatta, held the last weekend in July since 1984, features races and other social events. In some years as many as 40 boats participate. 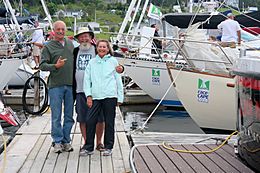 Boats and crews at the start of Race the Cape 2013 at St. Peter's Lion's Club Marina

Race the Cape was a point-to-point sail race of 175 nautical miles, broken into five legs of up to 40 nautical miles through the Bras d’Or Lake and along Cape Breton Island's Atlantic coast leading north to the Cape Breton Highlands. Race the Cape was an International Sailing Federation – Off Shore Special Regulations (OSR) Category 4 Race, for both cruising boats and racing yachts. There were both Spinnaker and Non-Spinnaker Divisions. The last RTC Regatta was held in 2017.

While there are more than 20 launch ramps for trailered boats spread throughout the lake, they are scarce outside the lake villages.

The heavily indented shoreline of the lake system, bold shores and numerous protected coves and harbours with snug anchorages provide shelter and keep wave action small, resulting in the lake being known as one of the best sailing waters in North America.

Ocean-going ships presently enter the lake at the Great Bras d'Or and via the St. Patricks Channel to a gypsum quarry at Little Narrows.

Before construction of the Trans-Canada Highway and other roadways, ships and boats plied the Bras d'Or Lake carrying coal, gypsum, marble, agricultural and forestry products from Cape Breton to the outside world, via barge through the St. Peters Canal to destinations along the Atlantic coast of North America. In addition, some products – like marble quarried into the early 20th century at Marble Mountain, were shipped by lake barges through both lakes to Sydney for transshipment. Mail boats also ran on scheduled service across the lakes until the 1960s, providing connecting passenger service to the train at Iona.

The Mi'kmaq called the Bras d'Or "Pitupaq" Bi-doo-buck (long salt water). The lake connected ancient lakeside and even ocean coastal communities elsewhere on Cape Breton Island by canoe such as Chapel Island, Eskasoni, Wagmatcook, Waycobah, and Galtoneg, among many others. The lake was also a major source of food for these historic communities, with abundant populations of mussels, crabs, clams, trout, salmon, herring, cod and mackerel.

Historic role as a research centre and first Bell Labs

From the summer of 1886, famed inventor and scientist Alexander Graham Bell made his estate and future retirement home at Red Head, a peninsula opposite Baddeck. He named his 640 Acre estate Beinn Bhreagh (pronounced "ben vreeah" meaning "Beautiful Mountain" in Scottish Gaelic) and lived there half of his life until his death in 1922. It is because of Bell's connection to this area that Beinn Bhreagh and Baddeck are routinely featured on National Geographic maps showing eastern North America.

Bell established a research laboratory—the first Bell Labs on Beinn Bhreagh, and used the Bras d'Or Lake to test man-carrying kites, airplanes and hydrofoil boats, as part of his many and varying research activities.

Flight of the Silver Dart

Baddeck Bay, between Baddeck and Beinn Bhreagh, was the site of the first officially recognized heavier-than-air powered flight in the British Empire which then included Canada. The flight was performed by an airplane designed by Dr. Alexander Graham Bell, F.C. Baldwin and Glenn Curtiss and others, in the original Bell Labs on Beinn Bhreagh. The Silver Dart flew off the frozen ice of Baddeck Bay in January 1909. Commemorating this event, 100 years later, in January, 2009 a replica of the original airplane was flown off the ice in the same location: Baddeck Bay.

After demonstrating their airplanes using tricycle landing wheels and other innovations, Bell's laboratory on Beinn Bhreagh designed and built a hydrofoil boat- the HD4 – which set a water speed record of 71 MPH (63 knots) in 1919. HMCS Bras d'Or, an experimental 1960s-era Canadian Forces hydrofoil, reportedly the world's fastest warship ever built, was named in honour of the hydrofoils tested long before on Baddeck Bay by Bell.

—Gilbert M. Grosvenor, Chairman of the Board, National Geographic Society

Via Rail Canada's weekly Halifax–Sydney tourist passenger train, the Bras d'Or was named in honour of the spectacular scenery provided by Bras d'Or Lake along the eastern part of its journey.

All content from Kiddle encyclopedia articles (including the article images and facts) can be freely used under Attribution-ShareAlike license, unless stated otherwise. Cite this article:
Bras d'Or Lake Facts for Kids. Kiddle Encyclopedia.