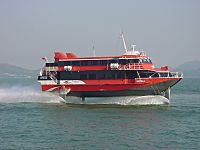 A hydrofoil is a type of boat that can lift its hull out of the water with a pair of special wings underwater. These wings are like the wings of an airplane.

When a hydrofoil moves quickly, its wings allow it to fly. When this happens the boat is said to be in foilborne. The result of flying means less of the boat is touching the water and can make the boat have less drag which allows it to move faster (drag slows a boat down). or special pontoons when going fast keep it out of the water.

All content from Kiddle encyclopedia articles (including the article images and facts) can be freely used under Attribution-ShareAlike license, unless stated otherwise. Cite this article:
Hydrofoil Facts for Kids. Kiddle Encyclopedia.