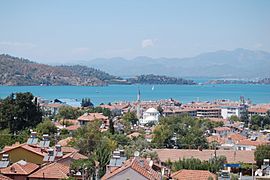 Fethiye is a city and district in the Mugla Province in Turkey. It is on the "Turquoise Coast". 59,425 people live there. There is a big harbor in the town and a marina. There are no beaches in Fethiye town, but there are many nice beaches around Oludeniz, a nearby town. There is a number of different places to stay including hotels.

The ancient name for the town was Telmessos. There are a number of historic sites including rock tombs. These were dug into cliffs by the Lycians. The tomb of Amnytas was built in the 4th century BC. Next to the harbor is a castle built by the Knights of Rhodes. In nearby villages there are also many historic sites including a temple to Apollo at Letoon, which is a World Heritage Site.

All content from Kiddle encyclopedia articles (including the article images and facts) can be freely used under Attribution-ShareAlike license, unless stated otherwise. Cite this article:
Fethiye Facts for Kids. Kiddle Encyclopedia.