The Ninety-Five Theses facts for kids 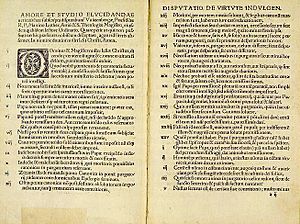 Luther argued that the Church should not sell indulgences. Because many people agreed, Luther became very popular, paving the way for the Protestant Reformation.

On October 31, 1517, Luther approached the church authorities with his pressing call for reform. On this day he presented them with his theses. When the bishops did not respond, Luther circulated his theses privately. The theses spread quickly and were printed in Nuremberg, Leipzig, and Basel.

Most recently, in February 2007, the media reported that a handwritten note by Luther's secretary Georg Rörer, found in the university library at Jena, appeared to confirm the traditional account of Luther's nailing the theses to the door. As of February 2007, this new find has yet to be assessed by scholars.

All content from Kiddle encyclopedia articles (including the article images and facts) can be freely used under Attribution-ShareAlike license, unless stated otherwise. Cite this article:
The Ninety-Five Theses Facts for Kids. Kiddle Encyclopedia.