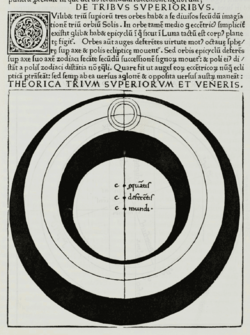 The scientific revolution was a time (1550-1700) following the Middle Ages and the Renaissance when many discoveries were made. During this time, new ideas and discoveries fundamentally changed the way people thought; they also forced people to think differently, and started what is called science today. Better printing presses after Johannes Gutenberg's time caused a great rise in publishing. This period roughly lasted from the 16th to the 18th century.

Galileo Galilei invented kinematics and disproved Aristotle's old theory of gravity. One of his students said he dropped two balls of iron (one weighing one pound, the other a hundred) off the leaning tower of Pisa. The objects fell at the same speed which brought about new methods of thinking in that time period. In 1542, Nicolaus Copernicus published his work On the Revolutions of the Heavenly Spheres, in which he said that not the earth, but the sun was at the center of the universe. This theory is known as Heliocentrism today. In the same year, Andreas Vesalius pubilshed his work On the Structure of the Human Body. This book is about the anatomy of the human body.

All content from Kiddle encyclopedia articles (including the article images and facts) can be freely used under Attribution-ShareAlike license, unless stated otherwise. Cite this article:
Scientific revolution Facts for Kids. Kiddle Encyclopedia.