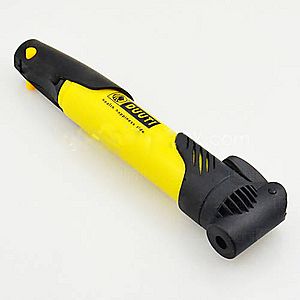 An air pump is a device for pushing air. Examples include a bicycle pump, pumps that are used to aerate an aquarium or a pond via an airstone; a gas compressor used to power a pneumatic tool, air horn or pipe organ; a bellows used to encourage a fire; a vacuum cleaner and a vacuum pump.

The first effective air pump constructed in England for scientific purposes was made in 1658 by Robert Hooke for Robert Boyle.

Pumps and compressors use very similar mechanisms, and basically perform the same action, but in different fluid regimes. At some point there is a crossover point in terminology, but here are some stereotypes:

• Compressors are intended to develop a very high pressure rise against a closed system; pumps are designed to develop relatively little pressure against a free-flowing system with minimal backpressure.

• Pumps are often used in continuous-flow operation, while many lower-end compressors must have intermittent duty cycles.

• Compressors usually have a feedback sensor to shut off when they reach a desired pressure; pumps have a fixed design and operate freely across their performance curve as conditions change

All content from Kiddle encyclopedia articles (including the article images and facts) can be freely used under Attribution-ShareAlike license, unless stated otherwise. Cite this article:
Air pump Facts for Kids. Kiddle Encyclopedia.