Covington is a city in central Tipton County, Tennessee. Covington is the largest city and county seat of Tipton County. The city is located in West Tennessee, a few miles from the Mississippi River. The city's population was 9,038 at the time of the 2010 U.S. Census. Located about 42 miles northeast of Memphis, Covington is part of the Memphis, Tennessee Metropolitan Area.

The Covington area was originally inhabited by Native Americans of various tribes. They used the nearby Mississippi River as a trading route among numerous American Indian nations, who for more than 1,000 years conducted continent-deep trading between the upper river and the Southeast. Evidence of such trading has been found in materials and items excavated from numerous archeological sites.

Tipton County is one of five present-day counties of the State of Tennessee that border the Mississippi River. The first Europeans to explore this area were attached to the noted expedition of the French Canadians Jacques Marquette and Louis Joliet in 1673. This expedition went down the Mississippi from present-day Wisconsin to the mouth of the Arkansas River, and then back upriver to Lake Michigan. The Arkansas River represents part of the border between present-day Arkansas and Mississippi. It is likely that de Soto and his men passed near here circa 1541.

During the 19th century, because this entire area consists of fertile floodplains and a climate of long, hot summers, and adequate rainfall, the Covington area and the rest of West Tennessee were developed for cotton plantations. This became the primary commodity crop across the South in the 19th century, generating great wealth for many large planters. African-American slaves were brought to Western Tennessee by planters relocating here, or forced here by sale in the domestic slave trade. West Tennessee was the center of large-scale slavery in Tennessee, and Memphis had a major slave market. Planters and farmers in Middle Tennessee also held slaves, although in fewer number. Farmers in the eastern part of the state mostly developed small subsistence farms and held few slaves.

During the Civil War, Union Army and Union Navy fought to gain control of strategic areas along the Mississippi River in order to control its traffic and split the Confederate States in two. The Confederate Army resisted, but the Union Army defeated and occupied forces in Tipton and other counties of Tennessee and northeastern Arkansas. The war ended early in the Covington area, and Tennessee was occupied by Union forces from 1862.

Starting in the 1870s during the Reconstruction era, the state legislature supported railroad construction in the region, to improve transporting crops to market. The Memphis and Paducah Railroad completed its tracks to Covington in July 1873. The first telegraph line between Memphis and Covington was completed in 1882. In 1894, electric power was installed in Covington. The city established a municipal water system in 1898 to provide residents with pure drinking water.

Twentieth-century improvements included street paving in 1922. Since 1929, a natural gas company has operated to provide cooking gas and wintertime heating to homes and business in Covington. The time that telephone service was installed in Covington is not known.

Following the invention of the automobile, during the 1910s and 1920s the United States began to construct more intercity paved highways in various regions of the county. These developed into the U.S. Numbered Highway System, and U.S. Route 51 was established. This highway connects Memphis and points south with Chicago, via Covington and Cairo, Illinois. Covington is a small town with access to a major north-south highway of commerce and travel.

Both black and white tenant farmers and sharecroppers in West Tennessee struggled with poverty as a result of lower cotton prices during the Great Depression, which added to social tensions between ethnic groups. Whites maintained their political supremacy, having disenfranchised most blacks at the turn of the 20th century.

The South Main Historic District in Covington includes about 50 houses from the late 19th and the early 20th centuries, along with commercial structures of historic interest.

Covington is part of the Memphis, Tennessee Metropolitan Area, and is located about 42 miles northeast of that large city. U.S. Route 51, a major north-south highway running between Mississippi and Illinois, passes through the city.

According to the United States Census Bureau, this town has a total area of 10.3 square miles (27 km2), of which practically all of it is land.

Covington is situated on the southeastern edge of the New Madrid Seismic Zone, an area judged by geologists to have a high risk of earthquakes in the future. 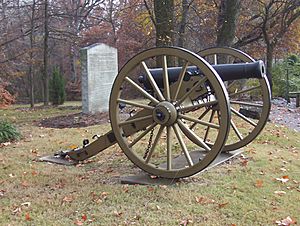 There were 3,199 households out of which 34.1% had children under the age of 18 living with them, 37.9% were married couples living together, 25.4% had a female householder with no husband present, and 33.2% were non-families. 29.9% of all households were made up of individuals and 13.4% had someone living alone who was 65 years of age or older. The average household size was 2.54 and the average family size was 3.17.

The Tipton County Museum is located in Covington. This museum displays and interprets artifacts from Tipton County's rich heritage. It also has a nature center depicting the unique ecosystem of West Tennessee. Mountings of local animal species are kept there, and fragments of mastodon bone represent species alive during its ancient natural history. Adjacent to the museum, there is a 20-acre park, with a 0.5 miles (805 m) walking trail. Natural woodland and a man-made wetland provide habitat to some of the smaller local species such as turtles and birds.

The Veterans Memorial in front of the museum commemorates the soldiers from the county who lost their lives in wars. This museum is closed on Sundays and Mondays, and admission to the museum and to the park is free.

The climate in this area is characterized by hot, humid summers and generally mild to cool winters. According to the Köppen Climate Classification system, Covington has a humid subtropical climate, abbreviated "Cfa" on climate maps.

All content from Kiddle encyclopedia articles (including the article images and facts) can be freely used under Attribution-ShareAlike license, unless stated otherwise. Cite this article:
Covington, Tennessee Facts for Kids. Kiddle Encyclopedia.