Grand Rapids is a city in and the county seat of Itasca County, Minnesota, United States. The population was 10,869 at the 2010 census. The city is named for the 3.5-mile (5.6 km) long local rapids in the Mississippi River, which was the uppermost limit of practical steamboat travel during the late 19th century. Today the rapids are hidden below the dam of the Blandin Paper Mill.

Grand Rapids was founded as a logging town, as the Mississippi River provided an optimal method of log shipment to population centers. The predecessor of the Blandin paper mill opened in 1902.

The Forest History Center is a State Historic Site and a living history museum that recreates life as it was in a turn of the 20th century logging camp. Costumed interpreters guide visitors through a recreated circa 1890s logging camp to educate the public on the history of white pine logging and its relevance to today's economy. Miles of nature trails, educational naturalist programming, and an interpretive museum are also located on the site.

Old Central School, located in downtown Grand Rapids, was built in 1895 in the Richardsonian Romanesque style of architecture. The three story building served as an elementary school from 1895 to 1972. A community effort restored the building in 1984 and it now serves as a location for commerce and is listed on the National Register of Historic Places.

Grand Rapids is the county seat of Itasca County, a county that contains over 1000 lakes.

The city of Grand Rapids sits at the junction of U.S. Highways 2 and 169. U.S. Highway 2 runs west towards Bemidji and east towards Duluth. U.S. Highway 169 heads south to Hill City, and ultimately towards the city of Minneapolis. In the other direction, U.S. Highway 169 heads up the Mesabi Range until it reaches the city of Virginia, passing through Hibbing and several other smaller towns along the way. Grand Rapids is also the starting point of State Highway 38, running 47 miles (76 km) north along the Edge of the Wilderness Scenic Byway towards Effie. State Highway 38 has been designated a National Scenic Byway by the United States Department of Transportation.

The following routes are located within the city of Grand Rapids.

The city of Grand Rapids has a Humid continental climate (Köppen Climate Classification Dfb) with warm summers and long, cold winters, typical of its location on the Mesabi Iron Range.

Historically, the local economy was based on timber harvesting, and to this day, Blandin Paper Mill, now owned by the Finnish-based UPM paper company, has its papermaking facilities in downtown Grand Rapids, while Ainsworth (formerly Potlach) located just outside the city limits, produced oriented strand board until it ceased operation in September 2006.

The Mesabi Range or Iron Range region of Minnesota begins with one iron mine to the southwest and a number to the northeast of the city. Although technically and geographically a member of the Iron Range, Grand Rapids and its economy has been historically based on paper manufacturing and other wood products. Its current economy also has a large tourist footing, with many local resorts, four golf courses, over one million acres (4,000 km2) of public and industrial forestlands that provide excellent regional hunting, and more than 1,000 lakes for fishing. It also is the service center for 46,000 people due to a large seasonal and weekend population of summer residences on surrounding lakes, and a number of smaller bedroom communities located near Grand Rapids.

Schools in ISD 318 include:

Grand Rapids also has the following parochial and secondary schools: 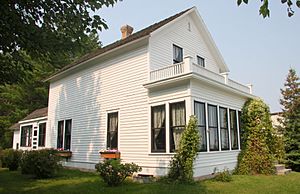 All content from Kiddle encyclopedia articles (including the article images and facts) can be freely used under Attribution-ShareAlike license, unless stated otherwise. Cite this article:
Grand Rapids, Minnesota Facts for Kids. Kiddle Encyclopedia.