Walker is a city in Cass County, Minnesota, United States. The population was 941 at the 2010 census. It is the county seat of Cass County.

Walker is part of the Brainerd Micropolitan Statistical Area. 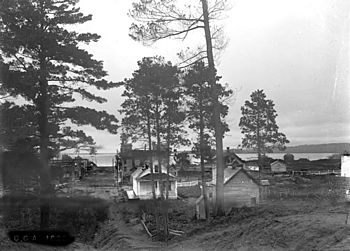 The area was inhabited for thousands of years by succeeding cultures of indigenous peoples. Before European settlement, the Ojibwe moved into the area from the Great Lakes, pushing out the historic Dakota peoples, such as the Assiniboine and Hidatsa. European American settlers followed the early fur traders and trappers, and encroached on Native American territories.

Following the construction of the railroad to the area, Patrick McGarry founded Walker in 1896. He named the settlement after the logging giant Thomas B. Walker, in hopes of luring construction of a sawmill. Thomas B. Walker instead chose to found and set up operations in nearby Akeley, because of his wife's moral objection to the bars in Walker, a rough frontier town. Walker developed with business, jobs and other services generated by four other logging companies.

Tourism later grew as a service industry. In the twentieth century, people from urban areas came to more rural areas for recreation associated with lakes, fishing, hunting and water sports. The city reached its peak of population in 1950.

In 1907, Walker became the home of the Ah-Gwah-Ching Center, first constructed as a residential facility for tuberculosis (TB) patients, who at the time could be treated only with good nutrition and rest. By 1927, it had 300 patients. The large facility had its own farm and dairy herd, the patients and staff put on skits and produced a newspaper, and it had its own railroad depot at one time. During the Great Depression, it was a site for display of art produced by artists paid by the Works Progress Administration, and has the largest WPA art collection in the state. In 1962, the facility was adapted as a state nursing home for psychiatric patients. The complex is listed on the National Register of Historic Places.

Walker is located on the southwest corner of Leech Lake, the third largest lake in Minnesota. According to the United States Census Bureau, the city has a total area of 2.47 square miles (6.40 km2), all of it land. Nearby cities and towns include Hackensack, Akeley, Whipholt, Laporte, Bemidji, and Onigum. The latter is one of eleven communities that make up the Leech Lake Indian Reservation.

There were 452 households, of which 21.2% had children under the age of 18 living with them, 33.4% were married couples living together, 8.4% had a female householder with no husband present, 3.5% had a male householder with no wife present, and 54.6% were non-families. 48.0% of all households were made up of individuals, and 23.4% had someone living alone who was 65 years of age or older. The average household size was 1.93 and the average family size was 2.82.

All content from Kiddle encyclopedia articles (including the article images and facts) can be freely used under Attribution-ShareAlike license, unless stated otherwise. Cite this article:
Walker, Minnesota Facts for Kids. Kiddle Encyclopedia.