Bemidji ( bə-MIJ-ee) is a city in Beltrami County (and county seat), in north west Minnesota, United States. With a population of 13,431 at the 2010 census, it is the largest commercial center between Grand Forks, North Dakota and Duluth, Minnesota. Bemidji houses many Native American services, which includes the Indian Health Service. The city is the central hub of the Red Lake Indian Reservation, White Earth Indian Reservation and the Leech Lake Indian Reservation. Bemidji lies on the south west shore of Lake Bemidji, the northernmost lake feeding the Mississippi River and as such is deemed "The First City On The Mississippi." Bemidji is also called the "curling capital" of the U.S.

Its name derives from the Ojibwe Buh-mid-ji-ga-maug (Double-Vowel orthography: bemijigamaag), meaning "a lake with crossing waters". On occasion, in Ojibwe, the city of Bemidji is called Wabigamaang ("at the lake channel/narrows"), because part of the city is situated on the Lakes Bemidji/Irving narrows, located on the south end of Lake Bemidji, and extends to the eastern shore of Lake Irving. Some sources also credit the name to Chief Bemidji, an Ojibwe chief.

Bemidji Township was surveyed in 1874 and organized in 1896 twenty-four days after the village of Bemidji was chartered and is the oldest township in the county. In 1897, the county attorney declared the original Bemidji township organization illegal (no reason given) and the township reorganized June 26, 1897.

Bemidji is near Chippewa National Forest, Itasca State Park, Lake Bemidji State Park, Big Bog State Recreation Area, and state forest areas. Bemidji has 400 lakes within 25 miles (40 km), 500 mi (800 km) of snowmobile trails and 99 mi (160 km) of cross country ski trails. Bemidji is home to many recreational events throughout the year. The Paul Bunyan Triathlon is the 3rd Saturday in August. The Dragon Boat Festival is a racing competition held at the waterfront during the first week of August. The Bemidji Polar Days is a week-long event held during the winter months. The Minnesota Finlandia Ski Marathon is also held in Bemidji. 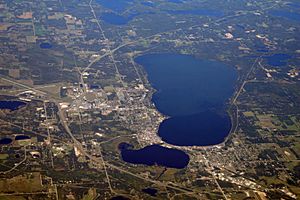 The largest earthquake on record for the Bemidji area was recorded on September 3, 1917. It is claimed that it shook houses down in Bemidji and across northern Minnesota. The epicenter was about 95 miles (153 km) away in Staples, Minnesota and affected an area of 48,000 square kilometres (19,000 sq mi) with a magnitude 4.4 with a maximum intensity of VI to VII. The closest and most recent quake occurred in Walker, Minnesota on September 27, 1982 with a magnitude of 2.0.

There were 5,339 households of which 24.9% had children under the age of 18 living with them, 28.7% were married couples living together, 14.4% had a female householder with no husband present, 4.8% had a male householder with no wife present, and 52.1% were non-families. 38.6% of all households were made up of individuals and 16.7% had someone living alone who was 65 years of age or older. The average household size was 2.18 and the average family size was 2.83.

There were 4,669 households out of which 25.9% had children under the age of 18 living with them, 34.0% were married couples living together, 14.7% had a female householder with no husband present, and 48.0% were non-families. 35.9% of all households were made up of individuals and 15.0% had someone living alone who was 65 years of age or older. The average household size was 2.22 and the average family size was 2.87. 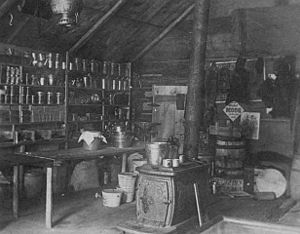 Bemidji is a college city with strong arts influences. The city's streets are lined with small shops and adorned with sculptures and other forms of public art.

The Concordia Language Villages are located near Bemidji and have been influential in the existence of several language conversational groups (including French, Chinese, Norwegian, Spanish, Italian, and German) that meet weekly in local coffee houses.

All content from Kiddle encyclopedia articles (including the article images and facts) can be freely used under Attribution-ShareAlike license, unless stated otherwise. Cite this article:
Bemidji, Minnesota Facts for Kids. Kiddle Encyclopedia.