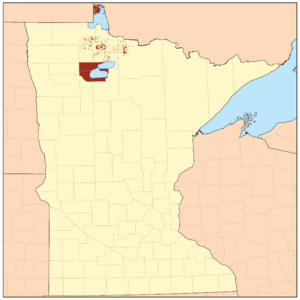 The Red Lake Indian Reservation (Miskwaagamiiwi-zaaga'igan) covers 1,258.62 sq mi (3,259.81 km²) in parts of nine counties in northwestern Minnesota, United States. It is made up of numerous holdings but the largest section is an area about Red Lake, in north-central Minnesota, the largest lake entirely within that state. This section lies primarily in the counties of Beltrami and Clearwater. Land in seven other counties is also part of the reservation.

The second-largest section (49°16′N 95°03′W﻿ / ﻿49.267°N 95.050°W﻿ / 49.267; -95.050) is much farther north, in the Northwest Angle of Lake of the Woods County near the Canada–United States border. It has no permanent residents. Between these two largest sections are hundreds of mostly small, non-contiguous reservation exclaves in the counties of Beltrami, Clearwater, Lake of the Woods, Koochiching, Roseau, Pennington, Marshall, Red Lake, and Polk.

Home to the federally recognized Red Lake Band of Chippewa, it is unique as the only "closed reservation" in Minnesota. In a closed reservation, all land is held in common by the tribe and there is no private property. The tribe claims the land by right of conquest and aboriginal title; they were not reassigned to it by the United States government. The Red Lake Band of Chippewa refused to join with six other bands in organizing as the Minnesota Chippewa Tribe in the mid-1930s; at the time, its people wanted to preserve their traditional system of hereditary chiefs, rather than forming an electoral government.

As of 2011, the Ojibwe language is the official language of Red Lake.

In the 2000 census, Red Lake was the most populous reservation in the state, with 5,162 residents. The only place in Minnesota with a higher Native American population at that time was the state's largest city, Minneapolis, 250 miles to the south; it recorded 8,378 Indian residents that year. By 2007, the White Earth and Leech Lake reservations (both led by parts of the Minnesota Chippewa Tribe) had higher resident populations of enrolled Ojibwe.

In the 17th century, the Algonquian-speaking Ojibwa migrated into present-day Minnesota from the north around the Great Lakes. Their warriors went ahead of colonizers and were told to clear the way for the Anishinaabe families. Before invading the Mille Lacs region, Ojibwa warriors had forced their way into the region just west of what is now Duluth, Minnesota on Lake Superior. They established a village known as Wi-yah-kwa-kit-chi-ga-ming. It was later called Fond du Lac (Bottom of the Lake) by French fur traders, the first Europeans to interact with the Ojibwe in this area. From there, Anishinaabe warriors invaded the Sandy Lake and Red Lake regions. Their conquest of the Red Lake region may have occurred between 1650 and 1750. By that time, Anishinaabe people were already living in the Grand Portage, Rainy Lake, and Pembina region of present-day northern Minnesota.

William Whipple Warren, the first historian of the Ojibwe people, noted their longstanding associations with the French Canadians by the mid-18th century, due both to fur trading and intermarriage among their peoples. As a result, the Ojibwe fought with the French during the Seven Years' War against the English; it was known in North America as the French and Indian War. Although the English won the war and took over "French" territory in Canada and east of the Mississippi River, the Ojibwe retained many trading and family associations with ethnic French Canadians.

In the 1850s two Roman Catholic priests established a mission with the Red Lake band. Later, Catholic nuns from the Benedictine monastery (convent) in St. Joseph founded St. Mary's Mission at Red Lake. They organized a boarding school at the mission to serve Ojibwe girls, teaching them Christianity and English. Over time, most residents on the reservation adopted Roman Catholicism, although many also retained Ojibwe rituals and traditions, including funeral and mourning practices.

Allied with the Pembina Band of Chippewa Indians, in 1863 the Red Lake Band negotiated the Treaty of Old Crossing in Minnesota with the United States. They agreed to cede their lands in the Red River and Pembina area. They made additional agreements for land cessions in the following decades, under pressure of increased numbers of European-American settlers in the area.

The United States and Canada surveyed the international border between them to correct previous errors. By the corrected boundaries, the Northwest Angle was included within the United States, together with its historic residents, the Lac du Bois Band of Ojibwa. As they lacked federal recognition from the US Bureau of Indian Affairs, the US consolidated the small Lac du Bois Band administratively with the Red Lake Band.

While the tribe ceded large tracts of land to the US, it maintained a central portion. It resisted US attempts to gain its approval for allotment of communal land to individual households under the Dawes Act of 1887. This involved dividing communal tribal land into individual household plots for farming and private ownership. The US would declare any land remaining on the reservation after allocating 160 acres to each head of household as "surplus" and available for sale to non-Indians.

During this period, some of the Pembina Band of Chippewa Indians, refusing relocation to the Turtle Mountain or the White Earth reservations, escaped to the Red Lake Indian Reservation because it was "untouched Indian land." It had never left tribal control.

Red Lake leaders warned the United States about reprisals if their Reservation were violated. The members of the White Earth and Mille Lacs reservations both voted overwhelmingly to accept land allotments and allow the surplus land sold to the whites, with the tribes to receive the lump sums of money from the sales. The Leech Lake Reservation members also voted for land allotments. The October 5, 1898 Battle of Sugar Point was over land.

Only a small portion of the White Earth Reservation remained. This was the northeast part of the full reservation; it was a fraction of the original territory. All other Minnesota, Chippewa reservations were closed, with the lands sold off after the 1889 Nelson Act. As a result of the 1898 Rebellion, which occurred on the Leech Lake Reservation, the US changed its policy. It returned some land to Minnesota's remaining Chippewa reservations, including White Earth.

The current Red Lake reservation is entirely owned and occupied by members of the Red Lake Band, making it unique among reservations in Minnesota. (As a result of allotment and sales in the intervening years, some tribes own less than 10% of the land within their reservation boundaries). Red Lake is the most isolated reservation in the United States. In 1934, after the Indian Reorganization Act that year encouraged tribes to restore their governments, the tribe rejected joining six other Chippewa bands to organize the federally recognized Minnesota Chippewa Tribe under a written constitution. Its leaders did not want to give up the tradition of hereditary chiefs for an elected government or give up any control of its land to the Tribe. By 2007, the Minnesota Chippewa Tribe reported a total enrollment of more than 40,000 members.

In the 1950s, new tribal leaders of Red Lake wrote a constitution to establish democratically elected government of chairman and council, without term limits. The tribe elected its first chairman and tribal council in 1959. Roger Jourdain was repeatedly re-elected and retained power until 1990. Under his leadership, the tribe developed infrastructure on the reservation, including running water, roads, and housing.

The tribe has established a library and archives, and appointed a tribal archaeologist to study and preserve the archaeological artifacts of its people. Tribal schools on the reservation were established so that the children could be educated in their own community through high school.

Red Lake, like the White Earth, and Leech Lake reservations, is known for its tradition of singing hymns in the Ojibwe language.

Since the mid-20th century, the tribe has asserted a significant level of sovereignty. Due to its status as a "closed reservation", the tribe can assert a considerable amount of control over non-residents, including controlling their movements within the reservation or expelling them altogether. As an example, the tribe has barred journalists from entry on several occasions.

Political tensions have sometimes erupted into violence. In 1979, during a struggle over leadership, men with rifles attacked the tribal police station, and two teenagers were killed. One shot himself accidentally and the other was accidentally shot while struggling with a companion over control of a weapon. Men burned several buildings, including the home of the tribal chairman. The tribe and reservation was the first in the United States to issue its own vehicle license plates as a measure of its sovereign status. It is struggling to find ways to develop its economy. It is collaborating in the 21st century with the White Earth and Leech Lake bands to reach out to the business and academic communities to promote job development. (See "Economy" below.)

The communities of Red Lake Reservation tend to have housing units located on each side of one road, similar to other rural settlements.

Per capita income is lower at Red Lake than on any other reservation in the state. It was estimated at US$8,372 in 1999, according to the Northwest Area Foundation. Approximately 40% of residents live below the poverty line. Between 1990 and 2000, the population increased by 40% as people returned to the reservation after difficulty finding employment elsewhere during recession years.

An unemployment rate hovering near 60% and associated poverty are thought to contribute to a high level of crime. In 2004, the tribal police filed 3,500 court cases. The majority of the population is young, with approximately 60% of the residents under the age of 18.

All content from Kiddle encyclopedia articles (including the article images and facts) can be freely used under Attribution-ShareAlike license, unless stated otherwise. Cite this article:
Red Lake Indian Reservation Facts for Kids. Kiddle Encyclopedia.