Kids Encyclopedia Facts
Not to be confused with Beltrami, Minnesota.

Beltrami County (/bɛlˈtræmiː/ bel-TRAM-ee) is a county located in the northern part of the U.S. state of Minnesota. As of the 2010 census, the population was 44,442. Its county seat is Bemidji. The county's name comes from the Italian count Giacomo Beltrami, who supposedly explored the area in 1825. The county was created in 1866 and organized in 1896.

Portions of the Leech Lake and Red Lake Indian reservations are in the county. The northernmost portion of the Mississippi River flows through the southern part of the county, through the city of Bemidji. Beltrami County borders a total of nine counties, more than any other county in Minnesota, except for Renville County, which also borders nine counties. 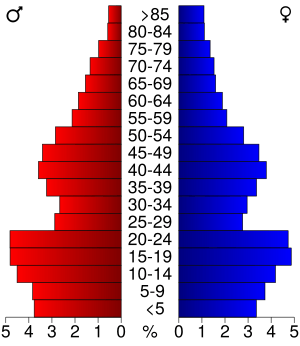 All content from Kiddle encyclopedia articles (including the article images and facts) can be freely used under Attribution-ShareAlike license, unless stated otherwise. Cite this article:
Beltrami County, Minnesota Facts for Kids. Kiddle Encyclopedia.