Koochiching County ( KOOCH-əch-əng) is a county located in the U.S. state of Minnesota. As of the 2010 census, the population was 13,311. Its county seat is International Falls. A portion of the Bois Forte Indian Reservation is in the county. A small part of Voyageurs National Park extends into its boundary, with Lake of the Woods County to its northwest.

Historymakers of Koochiching County were of many occupations. They were explorers, traders, homesteaders, and lumberjacks. They also were teachers, preachers, merchants, engineers, and builders of industry. Settlers came at the beginning of the 1900s and suffered through isolation, illness, harsh weather, and poverty. They built schools, churches, and good roads. Koochiching County is the second largest county in area next to Saint Louis County. It is also one of the youngest counties in the state having been created in 1906 after it was separated from Itasca County. The name "Koochiching" comes from either the Ojibwe word Gojijiing or Cree Kocicīhk (recorded in some documents as "Ouchichiq"), both meaning "at the place of inlets," referring to the neighboring Rainy Lake and River. Reverend J.A. Gilfillan recorded their meaning, "according to some, Neighbor lake, according to others a lake somewhere," possibly referring to the neighbouring Rainy Lake and to Lake Couchiching located in southern Ontario. Early European (French) inhabitants gave the names Lac à la Pluie (Rainy Lake) and Rivière à la Pluie (Rainy River) to the nearby bodies of water because of the mist-like rain present at the falls of Rainy River and then to the settlement that became known as International Falls. About 10,000 years ago almost 90% of Koochiching County was covered by Lake Agassiz. When it receded it left low areas of decayed vegetation (muskeg); as a result, three-quarters of northern Koochiching are underlain with 2 to 50 feet of peat. 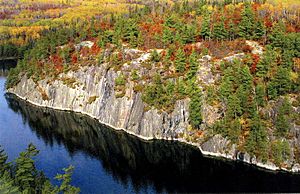 Major rivers in the county are Big Fork River, Little Fork River, Rat Root River, Black River, and Rapid River. The highest altitude in the county is in the Northome area which is 1426 feet above sea level which is about 325 feet higher than Rainy Lake. The land surface is mostly flat with swampy areas where Lake Agassiz basin was deepest. There are also deposits of peat from 1½ to 50 feet in the low areas which is a result from vegetation. The general surface of Koochiching County is flat with spots of land broken in places by ledges of precambrian rock. Bed rock in the area includes Ely greenstone and greenstone schists that are said to be among the oldest on the planet. In the northeastern tip of the county is a section of Voyageurs National Park and Black Bay. Franz Jevne State Park is located on Rainy River between International Falls and Baudette. 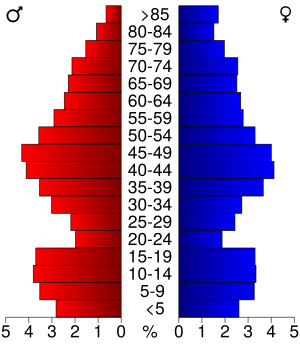 Koochiching County is unique in Minnesota, in the sense that there are no organized civil township governments within the county, due to legislative action taken by the county to absorb existing township governments. Survey townships, as defined by the Public Land Survey System exist but none are organized. Six city governments have been created, and the rest of the county consists of unorganized territories and unincorporated communities.

Koochiching County is the location of the fictional town of Frostbite Falls, the home of the animated characters Rocky and Bullwinkle. Frostbite Falls is widely assumed to have been named in honor of International Falls.

All content from Kiddle encyclopedia articles (including the article images and facts) can be freely used under Attribution-ShareAlike license, unless stated otherwise. Cite this article:
Koochiching County, Minnesota Facts for Kids. Kiddle Encyclopedia.