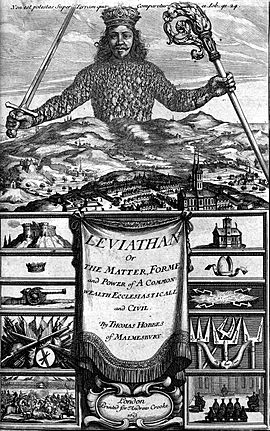 The frontispiece of Thomas Hobbes' Leviathan, depicting the Sovereign as a massive body wielding a sword and crosier and composed of many individual people

Sovereignty is the right of a government to have complete control over its area. The idea that this right comes from doing good things for the people under control of the government is as old as Ancient Greece if not older.

Ancient Rome was first the Roman Republic, but then when Octavian made the Roman Empire the Emperor of Rome said that he was "Sovereign". The meaning of this was that he could make any law he wanted, and he did not have to do what the law said himself.

In the time of the Middle Ages many kings and rulers had to do what other leaders said, such as the leader of the Catholic Church, the Pope. Because of this, the idea of "Sovereignty" was not used mostly.

In the time of the Protestant Reformation, in the 1500's and 1600's, governments were breaking away from religious leaders. Also many wars were fought between different rulers inside areas that are now sovereign countries. The English Civil War is one example of a war fought in this time between leaders inside one country.

The Peace of Westphalia was made in this time. The idea of "Sovereignty" came back now that governments were separate of outside leaders and only one government or ruler inside a country could make laws.

The English thinker Thomas Hobbes wrote a book in 1651 that said rulers and governments are "Sovereign" because they are good for the safety of the people. The idea that people could change rulers if they were not safe was new with Hobbes.

Jean-Jacques Rousseau wrote a book in 1763 that said the choice of the people is the only thing sovereignty comes from.

In 1789 the French Revolution made an important country's government ruled by the choices of the people for the first time after the Middle Ages (some cities and small countries were democracies in the Middle Ages). There were many problems and France went back to the old way soon after, but would be ready for Democracy in 1870's. In England, many people got to vote after The Reform Act in 1832. The United States broke away from England in 1776-1783, but was not an important country at that time.

"Sovereignty" when talking about relations between countries mostly means the rights a Sovereign state has over its territory.

Sometimes there is discussion about when a government loses Sovereignty because it is doing bad things for its people. In this case justice may mean other countries need to intrude on the sovereignty of the government.

"Sovereignty" when talking about relations between groups inside one country usually means which group has the Legitimacy to rule. This may not be certain. Sometimes the group who is most able to rule (because of a strong military) is not Legitimate.

All content from Kiddle encyclopedia articles (including the article images and facts) can be freely used under Attribution-ShareAlike license, unless stated otherwise. Cite this article:
Sovereignty Facts for Kids. Kiddle Encyclopedia.