LaPlace is a census-designated place (CDP) in St. John the Baptist Parish, Louisiana, United States, along the east bank of the Mississippi River in the New Orleans metropolitan area. The population is 32,134 at the 2010 census.

LaPlace is the southern terminus of Interstate 55, where it joins with Interstate 10, and of US 51, where it terminates at the junction with US 61. LaPlace is located 25 miles (40 km) west of New Orleans.

LaPlace's nickname is the "Andouille Capital of the World", referring to a variety of sausage.

LaPlace was settled as a farming village in the 18th century during the French colonial era. It was named after early settler Basile Laplace.

The city's railroad station was established in 1883.

LaPlace was the birthplace of early jazz musicians Kid Ory and Wellman Braud.

LaPlace has been designated "Andouille Capital of the World." An Andouille Festival is held every year in October. In his program "Feasting on Asphalt," TV chef Alton Brown visits LaPlace to sample its excellent sausage.

In early January 1811, a slave revolt began near LaPlace, known as the German Coast Uprising. This is said to have been the largest slave rebellion in U.S. history, with at least 200 and possibly as many as 500 insurgents.

It was larger than the revolt of 1836, which was more notorious; although there may have been many more slaves involved, overall, in the 1836 uprising and its ensuing three years of conflict. The revolt of 1836, known as the "Black Seminole Revolt" or Second Seminole War had an estimated number of 385 rebels at its height.

The difference is that the revolt of 1811 was ruthlessly put down by local white "militia" men within three days, and many of the rebel leaders and others were executed. The more extended rebellion of 1836 ended when the U.S. Army offered freedom to the holdouts, in exchange for a surrender. This was the only governmental emancipation of rebellious African American slaves in the antebellum era.

James H. Dormon, a University of Southwestern Louisiana professor of history and American studies, in a 1978 anthology, "Readings in Louisiana History"; wrote an article concerning the revolt of 1811, as did the late Thomas Marshall Thompson in the winter 1992 edition of Louisiana Historical Quarterly.

The Bonnet Carré Crevasse of 1871 occurred near LaPlace and resulted in severe flooding of New Orleans.

LaPlace is written with a capital letter in the middle of the word because Basile Laplace had a questionable background. A female member of the St. John the Baptist Parish Police Jury (the parish government) suggested a disassociation from him by using the spelling "LaPlace", which was agreed upon.

The Port of South Louisiana now maintains its headquarters in LaPlace.

There were 9,171 households out of which 44.9% had children under the age of 18 living with them, 60.4% were married couples living together, 14.9% had a female householder with no husband present, and 20.0% were non-families. 16.4% of all households were made up of individuals and 4.9% had someone living alone who was 65 years of age or older. The average household size was 2.97 and the average family size was 3.34. 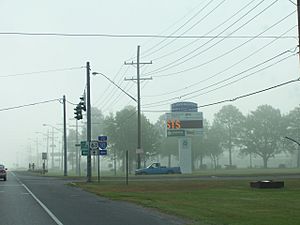 LaPlace was used as a filming location in:

All content from Kiddle encyclopedia articles (including the article images and facts) can be freely used under Attribution-ShareAlike license, unless stated otherwise. Cite this article:
LaPlace, Louisiana Facts for Kids. Kiddle Encyclopedia.