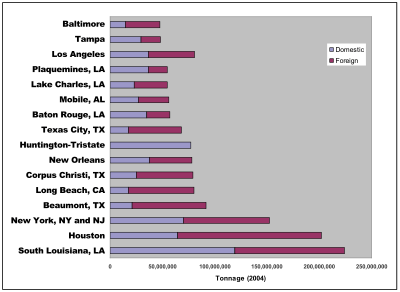 The Port of South Louisiana handles the largest amount of shipping, in tonnage, of all U.S. ports.

This port is critical for grain shipments from the Midwest, handling some 60% of all raw grain exports.

The ports of New Orleans, South Louisiana, and Baton Rouge cover 172 miles (277 km) on both banks of the Mississippi River. The Mississippi River-Gulf Outlet Canal (now closed by a rock dike built across the channel at Bayou La Loutre) extends 67 miles (108 km) from New Orleans to the Gulf of Mexico, and the channel up the Mississippi River from New Orleans to Baton Rouge runs at a 48-foot (14.6 m) draft. Overall, the navigational depths range from 12 feet to 48 feet (3.6 - 14.6 m) along the river, channels, and side canals. After Hurricane Katrina, the National Oceanic and Atmospheric Administration Office of Coast Survey used boats with sonar and scanners to assess underwater damage to the ports. Port authorities used these surveys to make decisions about when to open or close the ports.

According to the North American Export Grain Association, as of August 2005, these three ports serve as a gateway for nearly 55 to 70 percent of all U.S. exported corn, soy, and wheat. Barges carry these grains from the Mississippi River to the ports for storage and export. Imports to these ports include steel, rubber, coffee, fruits, and vegetables.

All content from Kiddle encyclopedia articles (including the article images and facts) can be freely used under Attribution-ShareAlike license, unless stated otherwise. Cite this article:
Port of South Louisiana Facts for Kids. Kiddle Encyclopedia.