Kids Encyclopedia Facts
Not to be confused with the similarly-named Columbia, Kentucky.

Columbus is a home rule-class city in Hickman County, Kentucky, in the United States. The population was 170 at the 2010 census, a decline from 229 in 2000. The city lies at the western end of the state, less than a mile from the Mississippi River.

Columbus-Belmont State Park borders the city to the west. 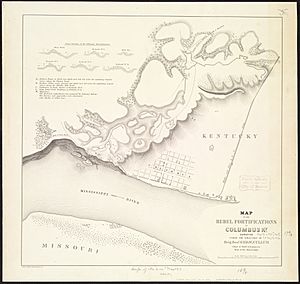 Map of Rebel Fortifications in 1862 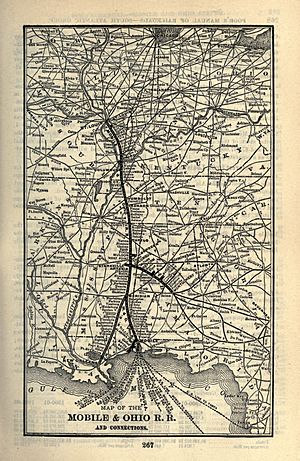 Columbus is the oldest town in Kentucky's Jackson Purchase. It was first settled on the Mississippi floodplain in 1804 and known as Iron Banks after the site's French name les rivages de fer. The long-held local rumor that President Thomas Jefferson planned to remove the American capital to the site has absolutely no basis in fact.

The name of the town was changed to Columbus (in honor of the Italian explorer) in 1820, the year the town received its first post office and its formal establishment by the state assembly. It was the original county seat of Hickman before the transfer of the court to Clinton. It was formally incorporated in 1860, just ahead of its seizure by Confederate forces (including the Louisiana "Shreveport Rebels") during the American Civil War the next year. The Columbus-Belmont State Park commemorates the Confederate general Leonidas Polk's attempt to maintain a large anchor chain across the entire Mississippi at Columbus, then the northernmost spur on the Mobile and Ohio Railroad, as well as the Union response, General Ulysses S Grant's victory at Belmont on the Missouri shore. The engagement was Grant's first direct combat during the war.

In 1878, the American railroad legend Casey Jones got his railroad first job here, working as a telegrapher for the Mobile and Ohio at the age of 15.

In 1927, a flood deluged the city. The town was reëstablished upon higher ground above the flood plain. Some of the original houses were saved and moved inland.

According to the United States Census Bureau, the city has a total area of 0.4 square miles (1.0 km2), all land.

There were 95 households, out of which 27.4% had children under the age of 18 living with them, 49.5% were married couples living together, 12.6% had a female householder with no husband present, and 35.8% were non-families. 31.6% of all households were made up of individuals, and 12.6% had someone living alone who was 65 years of age or older. The average household size was 2.41 and the average family size was 3.11.

The climate in this area is characterized by hot, humid summers and generally mild to cool winters. According to the Köppen Climate Classification system, Columbus has a humid subtropical climate, abbreviated "Cfa" on climate maps.

All content from Kiddle encyclopedia articles (including the article images and facts) can be freely used under Attribution-ShareAlike license, unless stated otherwise. Cite this article:
Columbus, Kentucky Facts for Kids. Kiddle Encyclopedia.