The European-American city of Muscatine began as a trading post founded by representatives of Colonel George Davenport in 1833. Muscatine was incorporated as Bloomington in 1839; the name was changed to reduce mail delivery confusion, as there were several Bloomingtons in the Midwest. Before that, Muscatine had also been known as "Newburg".

The name Muscatine is believed by some to have been derived from the Mascouten Native American tribe. The Algonquian-speaking Mascoutin were driven out of Michigan in around 1642 by French and Natives, and they were believed to have been absorbed into the Meskwaki (Fox) and Sac tribes by the early 18th century. In 1819 Muscatine Island was known as Mascoutin Island. An alternative theory is that the name is derived from a Siouan-language term meaning "Fire Island". Major William Williams, who was visiting when the town changed its name in 1849, wrote in his journal: "Muscatine in English is Fire Island," in his list of the meanings of Sioux Indian names.

Williams wrote a brief description of the settlement: 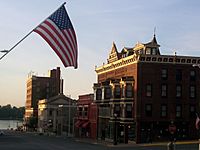 Downtown Muscatine at dawn, looking toward the Mississippi River

From the 1840s to the Civil War, Muscatine had Iowa's largest black community, consisting of fugitive slaves from the South and free blacks who had migrated from the eastern states. One of the most prominent community leaders was Alexander Clark Sr., a Pennsylvania native, barber and eventually a wealthy timber salesman and real estate speculator. He was among the founders of the local AME Church, assisted fugitive slaves, and petitioned the state government to overturn racist laws before the war. In 1863, Clark helped organize Iowa's black regiment, the 60th United States Colored Infantry (originally known as the 1st Iowa Infantry, African Descent), though an injury prevented him from serving.

In 1868, he successfully desegregated Iowa's public schools by suing the Muscatine board after his daughter Susan was turned away from her neighborhood school. Eleven years later, his son Alexander Jr. became the first black graduate of the University of Iowa College of Law and its first black graduate from any department. Clark Sr. went to the college and became its second black graduate five years later, despite being 58 years old, saying that he wanted to serve “as an example to young men of his own race.” Clark rose to prominence in the Republican Party, serving as a delegate to state and national conventions.

In 1890, Clark was appointed ambassador to Liberia by President Benjamin Harrison. He was one of four Muscatine residents to be appointed as a diplomatic envoy between 1855 and 1900, a remarkable feat for a town of such small size: George Van Horne was consul at Marseilles, France during the 1860s; Samuel McNutt served at Maracaibo, Venezuela in 1890; and Frank W. Mahin represented his country in Reichenberg, Austria in 1900.

Less than a year after arriving in Liberia, Clark died of fever. His body was returned to the US, where he was buried in Muscatine's Greenwood Cemetery. In 1975 the city moved his former house about 200 feet, to make room for a low-income apartment complex for senior citizens; the latter was named in his honor. The University of Iowa's chapter of the Black Law Students Association (BLSA) is named for the Clarks, as a testament to the accomplishments of father and son, and their places in the history of civil rights in Iowa.

The writer Sam Clemens (better known by his pen-name Mark Twain) lived in the city briefly during the summer of 1855 while working at the local newspaper, the Muscatine Journal, which was partly owned by his brother, Orion Clemens. He noted some recollections of Muscatine in his book Life on the Mississippi: 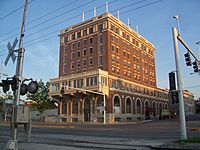 The former Hotel Muscatine has recently been remodeled. Opponents to the project stated the changes would ruin the historical integrity of the building.

In 1884 J.F. Boepple, a German immigrant, founded a pearl button company. He produced buttons that looked like pearls by machine-punching them out of freshwater mussel shells harvested from the Mississippi River. Muscatine's slogan, "Pearl of the Mississippi," refers to the days when pearl button manufacturing by the McKee Button Company was a significant economic contributor. In 1915, Weber & Sons Button Co., Inc. was the world's largest producer of fancy freshwater pearl buttons. From that time forward, Muscatine was known as "The Pearl Button Capital of the World". Weber is still manufacturing today and celebrated its 100-year anniversary in 2004. Muscatine is nearly as well known as the "Watermelon Capital of the World".

Muscatine was the home town and operating location of the notorious broadcaster Norman G. Baker, inventor of the calliaphone. In 1925-31, Baker operated the powerful radio station KTNT, published a newspaper, and operated the Baker Institute, a clinic. He also owned numerous businesses in the town.

Muscatine was formerly a stop on the shared Chicago, Rock Island and Pacific Railroad and Milwaukee Road line, but the Rock Island station no longer exists.

The two railroads split near the railroad crossing on county highway X61.

A portion of the Milwaukee Road's line is still extant and is used to serve one rail served business and for the storage of Rolling Stock.

Muscatine was hit by an EF3 (Enhanced Fujita Scale 3) tornado on June 1, 2007, which destroyed or damaged areas of the city.

On February 15, 2012, Vice President of the People's Republic of China Xi Jinping visited Muscatine. He had previously visited in 1985 as part of a Chinese delegation to learn about American agriculture, so Muscatine was again on his agenda when he toured the USA in 2012 before becoming president. The visit prompted the arrival of supporters as well as protestors. One group of protestors was aimed at China's human right's record and another voiced a Pro-Tibet perspective. 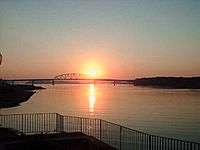 Sunrise over the Mississippi River

Muscatine is primarily located on a series of bluffs and hills at a major west-south bend in the Mississippi River. The river-bend gives the city roughly 260 degrees of riverfront. The "highland" area of the town is divided into three ridge-like hills by Papoose Creek and Mad Creek, each of which flow individually into the Mississippi in downtown Muscatine. The city's main roads follow these ridges and valleys in a spider-web-like fashion. Several large working-class neighborhoods and industrial sectors have been built on what is called "Muscatine Island". This flat, sandy expanse was largely underwater when a portion of the Mississippi River followed the course of the present-day Muscatine Slough. It is unclear when the river changed course. The hills, river, and island are all integral to the diversity of Muscatine's economy and housing sector. As the city's urbanized area develops, the areas of highest elevation in the "High Prairie" crescent (between the Cedar and Mississippi Rivers) are increasingly re-appropriated from agricultural land to suburban housing.

Positioned some 25 miles (40 km) (30 minutes) from the Quad Cities, 38 miles (61 km) (52 minutes) from Iowa City and some 68 miles (109 km) (75 minutes) from Cedar Rapids, Muscatine is the smallest link in a non-contiguous populated area which surpassed 800,000 residents in the decade following the 2000 census. The key feature of this region is that although the populated areas are non-contiguous, a high percentage of residents commute between the cities for work, particularly those in professional fields.

There were 9,008 households of which 34.3% had children under the age of 18 living with them, 46.8% were married couples living together, 13.4% had a female householder with no husband present, 5.5% had a male householder with no wife present, and 34.2% were non-families. 28.0% of all households were made up of individuals and 11.4% had someone living alone who was 65 years of age or older. The average household size was 2.50 and the average family size was 3.04.

There were 8,923 households out of which 33.4% had children under the age of 18 living with them, 52.7% were married couples living together, 11.0% had a female householder with no husband present, and 32.3% were non-families. 27.4% of all households were made up of individuals and 11.4% had someone living alone who was 65 years of age or older. The average household size was 2.49 and the average family size was 3.04.

Grain Processing Corp. (GPC) has been known to pollute the air by emitting small particles from its coal burning, acetaldehyde as a byproduct from corn ethanol processing, and also lead. "The plant released more lead than any other plant in Iowa, according to DNR data. It emitted more acetaldehyde — a probable carcinogen chemically similar to formaldehyde — than almost any plant in the country." The Kent-family owned company with an over 60 year presence has a long history of the Iowa Department of Natural Resources allowing it to avoid improvements that would reduce its air pollution. Yet in 2006 GPC had to pay a $538,000 fine for violating the hourly operating limit for years.

Grain Processing Corp. and other industries in Muscatine have worked hard to improve air quality. Iowa Dept. of Natural Resources supports their plan to reduce emissions. The plan includes GPC, Muscatine Power & Water and Monsanto Co working together to reduce emissions. GPC has made some significant investments in improving air quality. In May 2015 GPC announced their $83 million grain dryer was operational reducing the output of PM 2.5. This project was the largest and most comprehensive effort to date to address emissions. The project was completed on time as committed to the community. In July 2015 the company moved from coal to natural gas as their fuel source. GPC's conversion from coal has reduced boiler emissions by 91%, reduced carbon monoxide by 61%, particulate matter by 91%, sulfur dioxide was reduced by 99.9% and lead by 97%. GPC outlined their actions for improving the environment at a community leaders meeting on September 1, 2015, in an effort to be transparent to the community. This was the third meeting held with local community and business leaders to review their project and improvements. The meeting also reviewed various ways they support both employees and the community. GPC and parent company Kent Corporation have long provided education and development support for employee's growth. In addition, employees are encouraged to volunteer with service organizations in their home community.

Gage Kent, CEO at Kent Corporation, parent to Grain Processing Corporation commented that Muscatine is his home and the home for executives, employees and their families. He cited that everyone takes the role of being a good neighbor seriously. Kent, who is a lifelong resident of Muscatine said the company looks forward to a long future of sharing economic, environmental, and community accomplishments with Muscatine and its citizens. 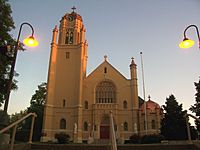 Muscatine is located along two designated routes of Iowa's "Commercial-Industrial Network", U.S. Highway 61 and Iowa Highway 92. Highway 61 serves as a major agricultural-industry route to the south from Burlington, IA to Muscatine, where it becomes a heavy-industrial and major commuter route to the northeast between Muscatine and Davenport, IA. In conjunction with Iowa 92, which provides access to the Avenue of the Saints (U.S. 218/IA 27) to the west and the lightly populated western Illinois via the Norbert Beckey Bridge to the east, Highway 61 serves as a shortcut for traffic from northeastern Missouri and southeastern Iowa en route to the Quad Cities, Chicago, and points beyond. Several regional highway improvement projects are in the works to further establish and capitalize on this trade-route. Additionally, Muscatine is connected to Interstate 80 to the north by fifteen miles (24 km) of Iowa Highway 38. Iowa Highway 22 also connects with U.S. 218/IA 27 to the west, and Davenport to the east.

All content from Kiddle encyclopedia articles (including the article images and facts) can be freely used under Attribution-ShareAlike license, unless stated otherwise. Cite this article:
Muscatine, Iowa Facts for Kids. Kiddle Encyclopedia.