Aitkin ( AY-kin) is a city in Aitkin County, Minnesota, United States. The population was 2,165 at the 2010 census. It is the county seat of Aitkin County. 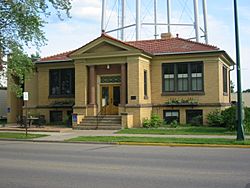 Aitkin was founded in 1870 when the Northern Pacific Railroad was extended to that point. The city and county were named for William Alexander Aitken, a partner of the American Fur Company and chief factor of the company's regional operations in the early 19th century. Many industries had attracted people to the town. In the late 19th and early 20th century, a massive wave of immigration, most likely from present day Ireland, Germany, and Scandinavian countries, had resided into the Aitkin area to pursue the logging and riverboat industries. After the Great Depression and World War II, the logging industry has changed the town into a farming community, consisting mostly of cattle and poultry, which continued until the late 1970s to early 1980s. A creamery and a turkey plant was one of the town's major economic and industrial contributors. Not many farms are currently in operation in Aitkin and many abandoned farms could be seen throughout the county. By the 1990s, Aitkin has changed into a community for retirement and tourism, especially with the lake areas and that continues up to today. Health care, education, human services, and non-profit organizations are one of the major contributors to the modern day Aitkin economy, along with the hospitality industry.

Aitkin throughout the years in various locations had been impacted by occasional flooding of the Mississippi River. Major notable floods had reached past 20 feet (6 m) such as the 1950 flood and nearly 19 feet (6 m), such as the summer flooding in 2012. Much damage has taken place in the town because of the floods, and the 2012 flood was one of the first floods that overflowed the lake areas, flooding the cabins, since it was based on heavy rainfall instead of melting snow.

Five properties in Aitkin are listed on the National Register of Historic Places: the 1901 Patrick Casey House, the 1902 Potter/Casey Company Building, the 1911 Aitkin Carnegie Library, the 1916 Northern Pacific Depot, and the Aitkin County Courthouse and Jail (built in 1920 and 1915, respectively).

According to the United States Census Bureau, the city has a total area of 2.20 square miles (5.70 km2), all of it land.

The Mississippi River flows through at the northern edge of Aitkin. The Ripple River and Sissabagamah Creek both flow nearby.

There were 936 households, of which 27.2% had children under the age of 18 living with them, 33.8% were married couples living together, 13.5% had a female householder with no husband present, 4.4% had a male householder with no wife present, and 48.4% were non-families. 43.5% of all households were made up of individuals, and 25.1% had someone living alone who was 65 years of age or older. The average household size was 2.08 and the average family size was 2.88.

The city's annual festivals include:

The Aitkin Municipal Airport is located at the northeast side of the city of Aitkin.

The following routes are located within the city of Aitkin.

American film actress and singer Judy Garland performed at the opera house in Aitkin as a young child. A small display related to Garland can be found in the converted opera house, now The Butler Building, in downtown Aitkin.

All content from Kiddle encyclopedia articles (including the article images and facts) can be freely used under Attribution-ShareAlike license, unless stated otherwise. Cite this article:
Aitkin, Minnesota Facts for Kids. Kiddle Encyclopedia.