Bethlehem Lutheran Church (also known as Swedish Evangelical Lutheran Bethlehem Church) is a historic Lutheran church in Nordland Township, Minnesota, United States. The church was constructed in 1897 by Swedish immigrants. The Gothic Revival building features a square tower topped by a belfry and an octagonal spire. The church's congregation formed in 1891 and was the second of five Swedish Lutheran churches established in the county. Aitkin County received a large influx of Swedish immigrants in the late 1800s, and the church is one of the best-preserved buildings constructed by the immigrant population upon their arrival.

The church was added to the National Register of Historic Places in 1982. 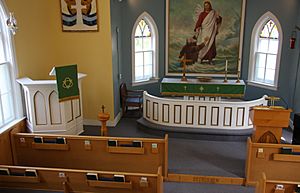 All content from Kiddle encyclopedia articles (including the article images and facts) can be freely used under Attribution-ShareAlike license, unless stated otherwise. Cite this article:
Bethlehem Lutheran Church (Aitkin, Minnesota) Facts for Kids. Kiddle Encyclopedia.