De Soto was named after Hernando De Soto the explorer who discovered the Mississippi. It was originally settled by Yankee settlers from New England. These were people descended from the English Puritans who settled New England in the colonial period. They were part of a migration of Yankee settlers from New England who moved west into the wilds of what was then the wilds of the Northwest Territory in the 1830s. The opening of the Erie Canal made this journey much easier, and the end of the Black Hawk War made the region much safer. These two events saw the already steady trickle of New Englanders turn into a heavy stream of migration. The founding of De Soto, Wisconsin was one small part of that migration.

There were 129 households, of which 31.0% had children under the age of 18 living with them, 48.8% were married couples living together, 10.1% had a female householder with no husband present, 3.1% had a male householder with no wife present, and 38.0% were non-families. 31.8% of all households were made up of individuals, and 15.5% had someone living alone who was 65 years of age or older. The average household size was 2.22 and the average family size was 2.83. 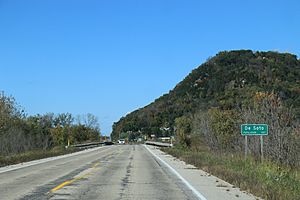 All content from Kiddle encyclopedia articles (including the article images and facts) can be freely used under Attribution-ShareAlike license, unless stated otherwise. Cite this article:
De Soto, Wisconsin Facts for Kids. Kiddle Encyclopedia.