Canton is a city in Lewis County, Missouri, United States. The population was 2,377 at the 2010 census. Canton is the home of Culver-Stockton College, a small liberal arts college affiliated with the Christian Church (Disciples of Christ). It also had the oldest continuously operating ferry across the Mississippi River, which closed in April 2014. Four members of the United States House of Representatives have come from Canton, and are buried in the city's Forest Grove Cemetery. Canton is part of the Quincy, IL–MO Micropolitan Statistical Area. 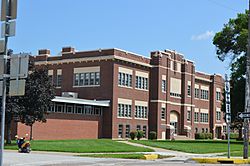 The city of Canton, believed to be named in honor of Canton, Ohio, predates the surrounding Lewis County by three years, having been founded in 1830, whereas the county would not be created from part of Marion county until 1833. It was founded by Issac Bland, Robert Sinclair, and Edward White—the latter constructing the town's first home in February, 1830. The building also doubled as Canton's first business, a tavern. Canton's early history could well be called a tale of two cities. The village of Tully, founded in November, 1834, was just a mile north of fledgling Canton and had a slightly better area for steamboats to anchor. Being the preferred spot to load and unload cargo, Tully slowed Canton's growth for the first two decades of its existence. However a series of floods, especially a major one in 1851, destroyed much of Tully. The few remnants of Tully were destroyed in the early 1930s during the construction of Lock and Dam No. 20. 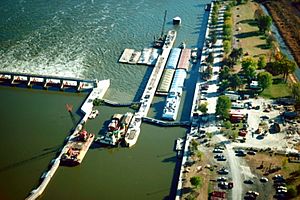 Canton, with its somewhat higher ground but still close river proximity experienced rapid growth over the next nine years after Tully's demise and by 1860 had a population of over 2,000 people. The town was officially incorporated on January 28, 1851. Ferry service across the Mississippi River dates back as far as 1844 in the Canton area, the first being at Tully. On February 24, 1853 a charter was granted for the "Lewis-Adams" river ferry. The early ferries were paddlewheel craft with the power supplied by horses on treadmills. Local travelers and those heading westward in pursuit of a new life meant heavy use of the ferry, with early fares being 50 cents per wagon and 10 cents for travelers on foot. In an era where railroads were still few Canton, along with Alexandria, Missouri several miles upriver to the north, became major trading and shipping points for towns and counties on the northeast Missouri interior. A stage line ran from Canton as far west as Kirksville, some eighty miles away in Adair county, prior to the American Civil War.

Henderson Hall looks out over Canton from atop "The Hill".

Another key event in Canton's history came about in 1853 with the founding of "Christian University", now known as Culver-Stockton College. Closed for a period of time during the Civil War, the college reopened in 1865 and has been a foundation of the community since. Henderson Hall, a.k.a. "Old Main", on the Culver-Stockton campus is listed on the National Register of Historic Places. As a strategic river port, Canton was involved considerably in the Civil War. Loyalties were heavily mixed and both the Union and Confederate armies recruited heavily in the town and surrounding area. Federal troops occupied Canton in July, 1861 to quell recent unrest and quash recruiting for the Missouri State Guard and pro-Confederate guerrillas by Lewis county residents Martin E. Green, Joseph C. Porter and others. On August 2, 1862 Colonel Porter ordered a raid on Canton. One resident was killed and another, a Union sympathizer, kidnapped by the bushwhackers, who also stole large quantities of weapons, medicine and other supplies.

Flooding at Canton in June, 2008. The river crested at its second-highest level ever at Canton, 27.73 feet.

Canton continued its role as gateway to northeast Missouri agricultural after the war, with several industries catering to those needs. Pork processing had begun in the 1840s, with thousands of hogs being slaughtered by the late 1870s. Iron plows, wagons, a patented hand corn planter, and buttons—using mussel shells from the nearby river—were some of the diverse items manufactured in Canton in the 19th century. Limited rail service had existed in Canton in antebellum times but the tracks were destroyed during Civil War fighting. Rail service was finally restored to the town in 1871 with the arrival of the St. Louis, Keokuk & Northwestern Railroad. While the Mississippi river has been the lifeblood of the town, it has also been Canton's nemesis throughout the years. Major flooding has occurred many times in the town's history. Some of the more notable, in addition to the aforementioned 1851 flood, were in 1929, 1973, 1993 and 2008. The 1929 flood was caused by a levee break. Within an hour of the break two square miles of the town and surrounding countryside were underwater, including more than 200 homes and the Canton school building but no lives were lost. During the New Deal era, Jessie Hull Mayer won the federal commission to complete a murals in the Canton post office. Murals were produced from 1934 to 1943 in the United States through the Section of Painting and Sculpture, later called the Section of Fine Arts, of the Treasury Department. Mayer's mural, Winter Landscape was installed in 1940 and was restored in 1971, with additional restoration work performed in 2005.

Periodic flooding of the downtown area happened again after World War II, but was largely ended by construction of a bigger and stronger levee in the 1960s. Due to the new levee the Mississippi Flood of 1973, the Great Flood of 1993 and the June 2008 Midwest floods left Canton with far less damage than previous events and spared the town from the fates of other river towns. In June, 2013 a new "levee walk" and wetlands area was added to the Canton riverfront. The 2,000 foot trail provides both recreation and educational possibilities about the river and its habitat. Tornadoes have also been unkind to Canton. Several smaller ones have touched down in or very near the town in its history, with most doing little damage. However, a large tornado struck Canton on May 10, 2003 damaging an estimated 100 structures, 40 of them severely, but leaving only four persons injured. The Culver-Stockton College fieldhouse, which just hours earlier had contained a large crowd for spring commencement, was virtually destroyed while the dome on Henderson Hall was also ripped away. Henderson Hall is one of three locations in Canton listed on the National Register of Historic Places, the others being the Lock & Dam No 20 Historic District, and the Lincoln School building, a former school for African-American children in existence from 1880 to 1955.

There were 829 households of which 29.9% had children under the age of 18 living with them, 43.5% were married couples living together, 11.1% had a female householder with no husband present, 4.8% had a male householder with no wife present, and 40.5% were non-families. 35.1% of all households were made up of individuals and 14.8% had someone living alone who was 65 years of age or older. The average household size was 2.27 and the average family size was 2.93.

There were 884 households out of which 31.2% had children under the age of 18 living with them, 45.7% were married couples living together, 12.4% had a female householder with no husband present, and 39.3% were non-families. 35.1% of all households were made up of individuals and 17.3% had someone living alone who was 65 years of age or older. The average household size was 2.28 and the average family size was 2.96.

All content from Kiddle encyclopedia articles (including the article images and facts) can be freely used under Attribution-ShareAlike license, unless stated otherwise. Cite this article:
Canton, Missouri Facts for Kids. Kiddle Encyclopedia.