Fulton is a home rule-class city in Fulton County, Kentucky, United States. The population was 2,357 at the 2020 census, down from 2,445 at the 2010 census. It was once known as the "Banana Capital of the World", because 70% of imported bananas to the U.S. used to be shipped through the city. Fulton is part of the Union City-Hickman, TN–KY Micropolitan Statistical Area.

A post office was established in the community, then known as "Pontotoc", in 1847. The post office was renamed "Fulton" in 1861. It was formally incorporated by the state assembly in 1872. Fulton Station was located on the Paducah and Gulf Railroad.

In the first decade of the 20th century, the Southern Baptist clergyman Monroe E. Dodd began his long ministry at a church in Fulton. For many years afterward, he was the pastor of First Baptist Church of Shreveport, Louisiana. A decade earlier, Ben M. Bogard, later the founder of the American Baptist Association in Texarkana, Texas, and long-time pastor of Antioch Missionary Baptist Church in Little Rock, Arkansas, had been a pastor in Fulton, where he was part of the Landmark Baptist movement.

Banana Capital of the World

The United Fruit Co., now Chiquita, began shipping bananas from South America by ship to New Orleans. The bananas were loaded onto railcars on top of 162-pound (73 kg) blocks of ice for the trip north. Fulton had the only ice house on the route north to Chicago. The bananas were re-iced with blocks from the Fulton Ice Plant, now closed. Empty railcars were pulled up to the side of the ice house, and the large blocks of ice were loaded end up covering the entire box car. The bananas were then laid on top of the ice to continue their journey. At one point, over 70% of the bananas that were consumed in the US passed through Fulton.

From 1962 through 1992, Fulton held the International Banana Festival. The largest banana pudding in the world at 2,000 pounds (910 kg) was part of the banana parade.

In recent years, the festival was revived including the largest banana pudding. 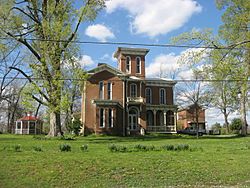 Amtrak, the national passenger rail system, provides service to Fulton. Fulton is one of only four cities in Kentucky with passenger rail service by Amtrak. The station is unmonitored and served by the City of New Orleans route running between New Orleans and Chicago.

Fulton is home to the Fulton Railroaders, a team in the KIT League, a minor league baseball league. The Railroaders play their home games in Lohaus Field.

Fulton has a public library, a branch of the Fulton County Public Library.

All content from Kiddle encyclopedia articles (including the article images and facts) can be freely used under Attribution-ShareAlike license, unless stated otherwise. Cite this article:
Fulton, Kentucky Facts for Kids. Kiddle Encyclopedia.