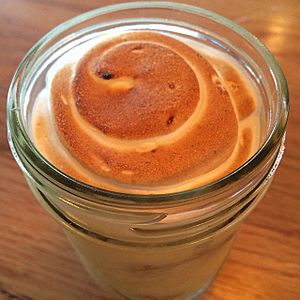 Banana pudding is a dessert generally consisting of layers of sweet vanilla flavored custard, cookies (usually Vanilla Wafers or ladyfingers) and sliced fresh bananas placed in a dish and served, topped with whipped cream or meringue.

It is commonly associated with Southern American cuisine, however, it can be found around the country. Furthermore, it closely resembles an English trifle in that it is assembled in layers and includes custard, fruit, sponge cake, and whipped cream.

Banana pudding can be prepared using a baked or refrigerated method, with the latter being the more popular, particularly among home cooks. Moreover, many recipes have been adapted using vanilla or banana pudding instead of a true custard. Other recipes omit the wafers. An early banana pudding recipe was published in The Kentucky Receipt Book, by Mary Harris Frazer, in 1903. However, even this recipe does not include wafers.

A typical method for making Banana pudding is to repeatedly layer the bananas, custard, and wafers into a dish and top with whipped cream or meringue. Over time, the wafers will absorb the custard and the layers will press together causing the flavors to intermingle.

The National Banana Pudding Festival is held at the Centerville River Park in Centerville, Tennessee. It is a 2-day event held on the first weekend of October.

All content from Kiddle encyclopedia articles (including the article images and facts) can be freely used under Attribution-ShareAlike license, unless stated otherwise. Cite this article:
Banana pudding Facts for Kids. Kiddle Encyclopedia.