Kampsville is a village in Calhoun County, Illinois, United States, located on the west bank of the Illinois River. The population was 328 at the 2010 census, an increase from 302 in 2000.

Kampsville was originally known as Beeman's Landing, after James L. Beeman, a ferry operator on the Illinois River. After Stephen Farrow (1802–1856) purchased the ferry from Beeman, the name was changed to Farrowtown. The name Vedder was used when the post office was established in 1857. The name Kampsville was made official on 6 March 1872 and refers to Michael A. Kamp (1829–1922), who served as president of the village board and was also a postmaster at Silver Creek, north of Kampsville.

The Kampsville ferry crosses the Illinois River and connects the Kampsville segment of Illinois Route 108 with its remainder in Greene County. The ferry is free and runs 24 hours a day, seven days a week. It is one of two permanent ferries operated by the Illinois Department of Transportation.

The village is the base of operations for the Center for American Archeology, an educational and research organization dedicated to the archeological understanding of the Native Americans and of the European settlers in the region. It contains exhibits demonstrating evidence of 7,000 years of human habitation excavated at the Koster Site in nearby Greene County. 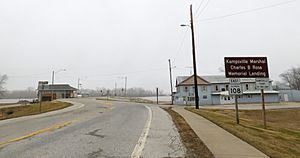 There were 133 households out of which 26.3% had children under the age of 18 living with them, 46.6% were married couples living together, 11.3% had a female householder with no husband present, and 38.3% were non-families. 33.1% of all households were made up of individuals and 18.8% had someone living alone who was 65 years of age or older. The average household size was 2.27 and the average family size was 2.93.

All content from Kiddle encyclopedia articles (including the article images and facts) can be freely used under Attribution-ShareAlike license, unless stated otherwise. Cite this article:
Kampsville, Illinois Facts for Kids. Kiddle Encyclopedia.