Calhoun County is a county in the U.S. state of Illinois. As of the 2010 census, the population was 5,089, making it Illinois' third-least populous county. Its county seat is Hardin. Calhoun County is at the tip of the peninsula formed by the confluence of the Mississippi and Illinois rivers and is almost completely surrounded by water. Often referred to as 'The Island,' Calhoun County is sparsely populated; it has just five municipalities, all of them villages.

Calhoun County is part of the Metro-East portion of the St. Louis, MO-IL Metropolitan Statistical Area.

The territory was originally settled by indigenous people who occupied the resource-rich river valleys near waterways. The remains of their occupation have provided some of the most valuable archaeological information in the country. The county's archaeological record chronicles more than 10,000 years of continuous human settlement by Native Americans.

Calhoun County was settled by European Americans during the 19th century, and officially organized in 1825. It was named for Vice President John C. Calhoun. The southern side of the county, covered in thick forest, was untouched until the population began to expand in the late 1840s with the arrival of German immigrants. Land was cleared for farming, exporting lumber, and constructing spacious log barns, typically 200 square feet (19 m2) in size, which were a "trademark of successful German farmers."

Calhoun County is a narrow 37-mile (60 km)-long peninsula of mostly high, rolling ground located between the Mississippi River and the Illinois River. The rolling hills escaped the leveling of glaciers.

County transportation is served by two state-operated, free ferries crossing the Illinois River (the Brussels Ferry in the south and the Kampsville ferry in the north). The Golden Eagle ferry, which is privately operated and charges a toll, crosses the Mississippi River to St. Charles County, Missouri. A bridge spans the Illinois River at Hardin. Land routes connect to the north to bordering Pike County.

When transportation was mainly by river, the county had many prosperous farms and orchards. It still produces a major portion of the peach crop of Illinois, and farmers raise corn and other commodities. The hotel in Brussels dates from 1847, when it was a stagecoach stop.

The county is popular with tourists due to the natural beauty of the Illinois River valley and its proximity to the Great River Road on the Illinois side. It includes part of the Two Rivers National Wildlife Refuge and attracts thousands of birds in migration seasons as part of the Mississippi Flyway. The county has several designated historic districts in the villages and properties listed on the National Register of Historic Places.

Calhoun County was added to the St. Louis Metropolitan Statistical Area in 2003, along with Bond and Macoupin counties in Illinois, and Washington County, Missouri.

The Center for American Archeology is located in Kampsville in the northern part of the county. It has been the center for study of prehistoric indigenous culture in the area. It has created educational opportunities for children and adults to participate in its archaeological digs. 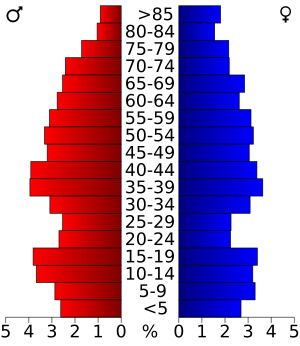 All content from Kiddle encyclopedia articles (including the article images and facts) can be freely used under Attribution-ShareAlike license, unless stated otherwise. Cite this article:
Calhoun County, Illinois Facts for Kids. Kiddle Encyclopedia.