Kids Encyclopedia Facts
Not to be confused with Lincoln, Missouri. 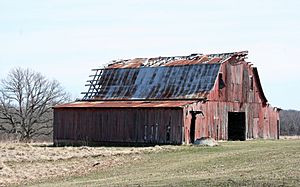 Lincoln County is located in the eastern part of the U.S. state of Missouri. As of the 2010 census, the population was 52,566. Its county seat is Troy. The county was founded December 14, 1818, and named for Major General Benjamin Lincoln of the American Revolutionary War.

According to Goodspeed's History of Lincoln County, Missouri (1888), Lincoln County was named by Major Christopher Clark, the first permanent white settler, when he addressed the Territorial Legislature saying, "I was born, sir, in Link-Horn County, N.C., I lived for many years in Link-Horn County in old Kain-tuck. I wish to die in Link-Horn County, in Missouri; and I move, therefore, that the blank in the bill be filled with the name Link-Horn." The motion was carried unanimously and the clerk, not adopting the frontier parlance of the Major, wrote "Lincoln" in the blank space of the bill. Others say it was named for Major General Benjamin Lincoln who served in the Continental Army during the American Revolutionary War.

All content from Kiddle encyclopedia articles (including the article images and facts) can be freely used under Attribution-ShareAlike license, unless stated otherwise. Cite this article:
Lincoln County, Missouri Facts for Kids. Kiddle Encyclopedia.