Located along the L'Anguille River in the Arkansas Delta just north of the St. Francis National Forest, the community was known as "Walnut Ridge" until 1852 when it became known as "Marianna". The town's economy has historically been based on agriculture, especially cotton production. The town is located along Crowley's Ridge Parkway and the Great River Road, both National Scenic Byways showcasing Crowley's Ridge and the Mississippi River.

The community was established by Col. Walter H. Otey in 1848 and was known as Walnut Ridge until 1852.

Marianna is located at the north-west tip of St. Francis National Forest.

According to the United States Census Bureau, the city has a total area of 3.6 square miles (9.3 km2), all of it land. The town's current mayor is Hon. Mayor Jimmy Williams who took office on Jan. 1, 2011.

On January 21, 2009, the director of the Arkansas Earthquake Center at the University of Arkansas announced the discovery of a major fault line near Marianna which could generate a 7.0 earthquake in the future. The fault is close to, but appears to be separate from, the nearby New Madrid Seismic Zone.

As of 2011, there are five schools in Marianna, two of which are private. The public schools in Lee County School District are Lee High School, Anna Strong Middle School, and Whitten Elementary School. One of the private schools is Lee Academy. 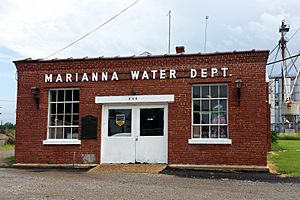 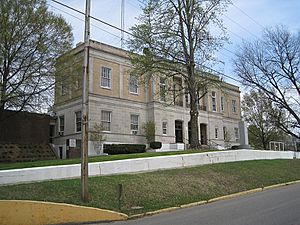 The Marianna Water and Sewer Commission directs the Marianna Water Department, which treats and distributes potable water to the residents and commercial users of the town. The Department also owns and operates a wastewater collection system, which collects wastewater from over 4,000 service connections and uses a series of laterals, interceptors and five lift stations to gravity flow wastewater to the Marianna Wastewater Treatment Plant (WWTP). At the WWTP, two lagoons are used to treats wastewater and discharge treated effluent to the L'Anguille River in accordance with the town's NPDES permit administered by the Arkansas Department of Environmental Quality.

All content from Kiddle encyclopedia articles (including the article images and facts) can be freely used under Attribution-ShareAlike license, unless stated otherwise. Cite this article:
Marianna, Arkansas Facts for Kids. Kiddle Encyclopedia.