Grafton is the oldest city in Jersey County, Illinois, United States. It is located near the confluence of the Illinois and Mississippi Rivers. As of the 2010 U.S. census, the city had a total population of 674. Prior to the Great Flood of 1993, Grafton had enjoyed a stable population of nearly 1,000 residents.

Grafton is a part of the Metro-East region and the St. Louis Metropolitan Statistical Area.

Founded in 1832 by James Mason, Grafton is the oldest city in Jersey County. Described as having "a post office, one store, one tavern, and a number of families" in 1834, the area was being settled as early as 1812 when a blockhouse was built at the confluence for protection. The city was named after Mason's birthplace of Grafton, Massachusetts. Grafton was incorporated on May 16, 1907.

Grafton’s population reached its peak at approximately 10,000 in the 1850s with employment opportunities coming from the local stone quarries, boat building and commercial fishing. At one point, there were five quarries in or around Grafton that employed nearly 2,000 men. The local limestone was used to build the Eads Bridge in St. Louis, government buildings in Rock Island, and the Jersey County Courthouse in Jerseyville. The Shafer’s Wharf Historic District was one of the largest commercial fishing centers along the Mississippi River in the late 19th century. The Old Boatworks, located south of Main Street, once housed a paint house and a machine shop where paddle wheelers and later PT boats were built. Today, the Old Boatworks building hosts many antique and craft stalls and is open on the fourth weekend of each month from May through October.

The Great Flood of 1993 caused significant damage to many of Grafton's structures, as well as causing a third of the city's residents to move out of the city. The effects of the flood are still present, as the city has not yet reached the population it had before the flood.

Typically, the city's climate reflects most Midwest cities, located in the transitional zone between the humid continental climate type and the humid subtropical climate type (Köppen Dfa and Cfa, respectively), with neither large mountains nor large bodies of water to moderate its temperature. Spring is the wettest season and produces severe weather ranging from tornadoes to snow or ice storms. Summers are hot and humid, and the humidity often makes the heat index rise to temperatures feeling well above 100 °F (38 °C). Fall is mild with lower humidity and can produce intermittent bouts of heavy rainfall with the first snow flurries usually forming in late November. Winters can be cold at times with periodic light snow and temperatures below freezing.

There were 265 households out of which 23.0% had children under the age of 18 living with them, 51.7% were married couples living together, 10.6% had a female householder with no husband present, and 34.0% were non-families. 29.1% of all households were made up of individuals and 15.1% had someone living alone who was 65 years of age or older. The average household size was 2.30 and the average family size was 2.84. 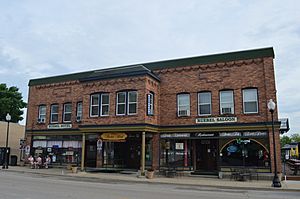 The Ruebel Hotel in Grafton

Grafton has seven places and sites that are listed on the National Register of Historic Places. The Grafton Historic District, Grafton Bank, the John and Amelia McClintock House, Ruebel Hotel, the Slaten-LaMarsh House, and the Paris Mason Building were all added in 1994. The Charles Brainerd House was added to the Register in 1998.

All content from Kiddle encyclopedia articles (including the article images and facts) can be freely used under Attribution-ShareAlike license, unless stated otherwise. Cite this article:
Grafton, Illinois Facts for Kids. Kiddle Encyclopedia.