Grafton is a town in Worcester County, Massachusetts, United States. The population, indicated by the 2014 town records is 14, 268, in nearly 5,700 households. Incorporated in 1735, Grafton is the home of a Nipmuc village known as Hassanamisco Reservation, the Willard House and Clock Museum, Community Harvest Project, and the Tufts University Cummings School of Veterinary Medicine. Grafton consists of the North Grafton, Grafton, and South Grafton geographic areas, each with a separate zip code. Grafton also operates the state's largest On-Call Fire Department, with 74 members.

Bands of the Nipmuc tribe were the indigenous inhabitants, and maintain a state-recognized reservation known as Hassanamessit, or Hassanamisco, which was formerly a Praying Indian village from 1647 when the Reverend John Elliot came and converted the Hassanamiscos to Christianity . Grafton was first settled by Europeans in 1724 and was officially incorporated in 1735.

Grafton stands tall in the industrialization of the Blackstone Valley. Its Northeast Village was once known as "New England Village". The following is an excerpt from the Blackstone Daily about the history of the town:

Grafton has been a significant contributor in the success and progress of the American Industrial Revolution that was started in 1793 by Samuel Slater with his cotton mill in Pawtucket [Rhode Island]. North Grafton's Upper Mill, now known as the Washington Mills complex, that still produces abrasives, was once known as the New England Manufacturing Company. This was part of the New England Village, as North Grafton was known for generations. This part of the mill was built in 1826 and was part of a much larger complex, but most of that is now gone, mainly due to serious fires. Mill housing was built at 12, 14 and 16 Overlook Street. These central-chimney-style homes were boarding houses with ornate trim that has since been lost.

The town is named for Charles FitzRoy, 2nd Duke of Grafton, a title created for the illegitimate son of King Charles II of England. Ethan Allen ran a gun factory in Grafton in the early 19th century. In the 1930s, a movie, Ah, Wilderness!, was filmed in the town. The moviemakers built a bandstand on the town common, which still stands there today. Grafton Common has many historic homes, churches and buildings and is considered the most quintessential common in the Blackstone Valley. The town is part of the Blackstone River Valley National Heritage Corridor, the oldest industrialized region in the U.S.

North Grafton is the home of the Wyman Gordon Company. In 1955, the United States Air Force installed a 50,000-ton metal forge in North Grafton as part of its Heavy Press Program in a plant operated by Wyman Gordon. It was the largest metal forge, and indeed the largest machine, in the world at the time it was built. This forge is used to form strategic metals used in commercial and military aircraft for turbine disks, shafts, and blades, landing struts and other aircraft parts where light weight and extreme strength are needed. The entire undercarriage of the space shuttles were forged in Grafton of magnesium.

From 1901 to 1973, North Grafton was home to the Grafton State Hospital. Originally an offshoot of the Worcester State Hospital, Grafton State Hospital served as a "farm colony" where chronically insane patients could live and work in somewhat normal surroundings. The campus was made up of several clusters of buildings and eventually encompassed 1,200 acres (490 ha) in Grafton, Shrewsbury, and Westborough. The hospital was closed in 1973, and the campus, including many of the original buildings, was taken over by the Cummings School of Veterinary Medicine (part of Tufts University) and the Grafton Job Corps center.

According to the United States Census Bureau, the town has a total area of 23.3 square miles (60 km2), of which 22.7 square miles (59 km2) is land and 0.5 square miles (1.3 km2), or 2.28%, is water. Grafton is located 40 miles (64 km) west of Boston and 5 miles (8.0 km) southeast of Worcester. Grafton includes North Grafton, Grafton, and South Grafton, as well as many other industrial revolution era villages due to its long history on the Blackstone River, including Farnumsville, Fisherville, Saundersville and Axtell Corner.

There were 5,694 households out of which 34.1% had children under the age of 18 living with them, 58.1% were married couples living together, 8.5% had a female householder with no husband present, and 30.6% were non-families. 24.6% of all households were made up of individuals and 8.1% had someone living alone who was 65 years of age or older. The average household size was 2.54 and the average family size was 3.07.

Commuter rail service from Boston's South Station is provided by the MBTA with the Grafton station on its Framingham/Worcester Line.

The Grafton and Upton Railroad currently operates a freight line through the town connecting the Framingham/Worcester Line to the Franklin Line in Milford. The Grafton Upton Line goes through the center of Grafton, and crosses many streets in the center of town, The rail sneaks behind the local gas station, Cumberland Farms, crosses Route 140, (Upton Street), it then goes right behind the Grafton Inn, it crosses North Street, and continues to cross Boulevard Avenue, It then enters, North Grafton, crossing over Carol Road, crosses Snow Road, and a few other minor roads, it then ends up crossing East Street and Waterville Street, before coming to a close in the North Grafton yard. Also, you should note that there is a few more crossings on Browns Road, Sibley Street, and Westborough road. The Westborough road crossing is hardly every used because it just connects the G/U line with the main line. (Framingham/Worcester.)

Also, the Worcester Regional Transit Authority has started a shuttle through the town connecting residents to different parts of the town and the Grafton Commuter Rail Station. This shuttle is also connected to the shuttle in one of the neighboring towns, Northbridge. 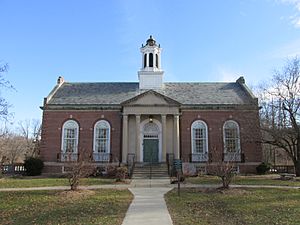 All content from Kiddle encyclopedia articles (including the article images and facts) can be freely used under Attribution-ShareAlike license, unless stated otherwise. Cite this article:
Grafton, Massachusetts Facts for Kids. Kiddle Encyclopedia.