Sutton, officially the Town of Sutton, is a town in Worcester County, Massachusetts. The population was 9,357 in the 2020 United States Census. Located in the Blackstone Valley, the town was designated as a Preserve America community in 2004.

A Nipmuc, John Wampas, visited England in the 1600s and deeded land in the Sutton area to Edward Pratt. Pratt sold interests in this land to others, and competing claims among them and the Nipmucs led to a General Court case in Massachusetts in 1704, which granted Pratt and his fellow proprietors an eight-mile-square section of land, which is now Sutton.

Three families were the first to settle on the land, that of Benjamin Marsh, Elisha Johnson and Nathaniel Johnson. Brothers Samuel and Daniel Carriel also occupied the Marsh family cabin. The "big snow" of 1717 completely buried their cabins. A friendly Indian found the cabin of the Johnson family only by seeing smoke from the chimney coming out of the snow. The Indian rescued the family, and as Mrs. Johnson recalled, "No voice ever sounded so sweet as that of that Indian down the chimney." Marsh served as a selectman, town moderator and in various other positions of responsibility as the town became established. His daughter, Abigail, was the first child born in Sutton. On Sep. 16, 1735, he founded the town's Baptist church, which is the fourth oldest Baptist church in Massachusetts. He served as elder of the church, and was pastor from 1737 until his death in 1775. They settled on property in the area called Manchaug, near Marble Village. It is home of one of the oldest schoolhouses in America dating back to the 18th century, according to the Worcester Telegram & Gazette.

By 1735, Hassananmisco and a small portion of the northeastern territory of the township of Sutton had incorporated as the town of Grafton. Millbury was set apart from Sutton in 1813. In early days, Millbury was called North Parish. In the 1830s, a few members of the community went rogue and named a section Wilkinsonville (a section in north Sutton). This has not been accepted by the state of Massachusetts yet, but a few community members haven't given up hope. Another area name is "Pleasant Valley," now known due to a golf course of the same name in Sutton. 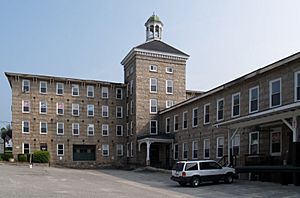 Through the 18th and 19th centuries, Sutton was a town that enjoyed both agricultural and industrial benefits. The farms and orchards in the area did very well, as did the three large mills that were built in the Manchaug area.

The town is part of the historic Blackstone River Valley National Heritage Corridor and has several of its sites.

Purgatory Chasm State Reservation is located in the eastern part of town.

All content from Kiddle encyclopedia articles (including the article images and facts) can be freely used under Attribution-ShareAlike license, unless stated otherwise. Cite this article:
Sutton, Massachusetts Facts for Kids. Kiddle Encyclopedia.