Millbury is a town in Worcester County, Massachusetts, United States. The population was 13,261 at the 2010 census. The town is part of the Blackstone River Valley National Heritage Corridor. 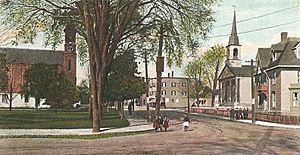 Millbury was first settled by Europeans in 1716 and was incorporated as a town in 1813.

Millbury has a long history as a New England mill town, from which the town's name is derived. The Blackstone River flows through the town which during the Industrial Revolution provided much of the water power to the town's many textile mills and factories.

Millbury was originally the Second or North Parish of Sutton. Because traveling from one part of Sutton to the other for town meetings was time-consuming, the inhabitants of the Northern Parish petitioned the Massachusetts General Court to split the town of Sutton into two separate towns. The North Parish became the town of Millbury on June 11, 1813 by way of an act of incorporation.

Millbury's industrial history begins in the early 18th century, not long after the area's settlement. In 1735, John Singletary began operating a mill on Singletary Brook, a stream flowing out of Singletary Lake. Around 1753, John Singletary built the S & D Spinning mill, which is still in operation, making it one of the oldest continuously operating mills in the United States. The mill is featured on the Town Seal. The mill also makes the red stitching that is on major league baseballs. 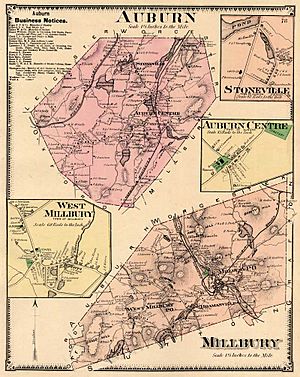 In the late 18th and early 19th centuries, after learning the trade of firearms production from their father, Asa Waters II and his brother Elijah purchased land along the Blackstone River and built mills producing goods such as guns, scythes and sawmill saws. In 1808, Asa and Elijah erected an armory which was successful until forced to close suddenly in 1841. It reopened at the start of the Civil War in 1861, doing work for the U.S. government. With the wealth Asa Waters II received from his factories, he began construction, in 1826, of a Federal-style mansion, near the town center on Elm Street. Designed by Boston architect Asher Benjamin, it was completed in 1832. It took two years to collect materials for construction of the house, including marble from Italy and bricks from Baltimore. Known as the Asa Waters Mansion, it is an icon of the town.

President William Howard Taft spent many summer vacations in Millbury as a young boy, attending the public schools for a season. When he grew older, he visited his grandparents most summers. He visited his aunt, Delia C. Torrey, during his presidency for the occasion of Millbury's 100th birthday. The Torrey House, where President Taft stayed during his visit, is commonly called the Taft House today.

In the early 1970s, Millbury experienced a number of large fires. Millbury celebrated its Bicentennial in 2013 with many town events. A proposal for a casino was made in 2013, but company pulled out when it became clear that a large majority of the towns people were against the idea.

There were 4,927 households out of which 30.2% had children under the age of 18 living with them, 55.7% were married couples living together, 10.9% had a female householder with no husband present, and 30.1% were non-families. 24.6% of all households were made up of individuals and 10.3% had someone living alone who was 65 years of age or older. The average household size was 2.53 and the average family size was 3.03. 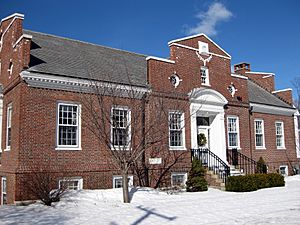 Millbury Public Library in the Snow 01

All content from Kiddle encyclopedia articles (including the article images and facts) can be freely used under Attribution-ShareAlike license, unless stated otherwise. Cite this article:
Millbury, Massachusetts Facts for Kids. Kiddle Encyclopedia.