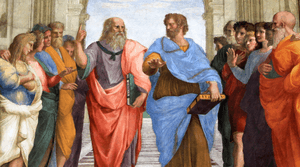 The Lyceum was originally a public meeting place in classical Athens. It became the meeting place for the discussion group or "school" of Aristotle. He founded the Peripatetic school there in 334/335 BC. The school was called "peripatetic" because they used to walk around as they discussed things. It was more like a college for young adults than what we now call a school.

The word "Lyceum" now means a school in most parts of Europe. Usually, it covers the last two or three years and prepares the pupils for university.

The school started when Athens fell under Macedonian rule, and the 50-year old Aristotle returned from Asia. Aristotle had been the tutor of Alexander of Macedonia, Alexander the Great. In Athens, he began teaching regularly in the morning in the Lyceum. The group of scholars who took part came to be known as the Peripatetics.

Aristotle encouraged cooperative research. His students were given projects as part of their studies. The school was also student run. They elected a new student administrator every ten days, which allowed the students to become involved in turn.

During his conquests of Asian regions, Alexander collected plant and animal specimens for Aristotle’s research. Aristotle developed the first zoo and botanical garden in existence. Alexander may also have given money to the Lyceum. In 322 BC, Aristotle was forced to flee Athens with his family when the political leaders reacted against the Macedonians. Aristotle's published works supporting Macedonian rule left him a target. He passed on his Lyceum to Theophrastus and died later that year near his hometown.

All content from Kiddle encyclopedia articles (including the article images and facts) can be freely used under Attribution-ShareAlike license, unless stated otherwise. Cite this article:
Lyceum Facts for Kids. Kiddle Encyclopedia.