Northbridge is a town in Worcester County, Massachusetts, United States. The population was 15,707 at the 2010 census. The Northbridge Town Hall is located at 7 Main Street in Whitinsville. The town is now a part of the Blackstone River Valley National Heritage Corridor, of the National Park Service. Northbridge claims to history include: Native American Nipmuc lands, Colonel John Spring, who led the Uxbridge militia training company in the American Revolution, Samuel Spring, Revolutionary War Chaplain, the Residence of Ezra T. Benson 1830-1832, the birthplace of President Millard Fillmore's mother, Phoebe, and home to the Whitin Machine Works from 1831 to 1964

The earliest residents were the Nipmuc, or "Small Pond People". They had a well-developed agriculture, made tools, and had a graphite mine at Sturbridge. Northbridge was first settled by Europeans in 1704 and was officially incorporated on July 14, 1772. The town was once part of Mendon, from 1667 to 1726, and part of Uxbridge, from 1727 to 1772. Colonel John Spring, who had agitated for the new town of Northbridge, and later reversed his position, led a company of men in the Massachusetts Militia in the Revolution. Dozens of local men fought at the Lexington alarm, and at Bunker Hill. Samuel Spring, John's son, became a Revolutionary War Chaplain commissioned in the militia at the Siege of Boston, and who also served in the Invasion of Canada (1775) under Colonel Benedict Arnold.[1] Samuel carried Benedict Arnold and Aaron Burr, his Princeton classmate, off of separate battlefields. Colonel Seth Read and his brother, Colonel Joseph Read owned more than half of the land in this town at the time of the American Revolutionary War. They both fought in the Massachusetts Militia, and the Continental Army. The mother of President Millard Fillmore, Phoebe Millard (Fillmore), was born in Northbridge. Ezra Taft Benson, Sr., a famous Mormon pioneer, lived here from 1830 to 1832 on his sister's farm. He married Pamela Andrus, of Northbridge, and also apparently her sister, Adeline Brooks Andrus. He then married six more times and served as a missionary to the Sandwich Islands, and in the Utah Territorial Legislature. 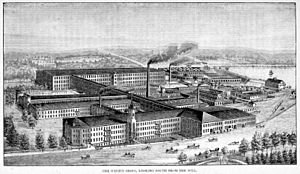 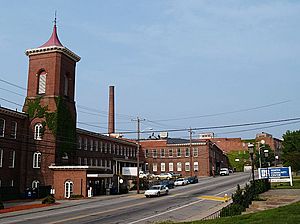 The former Whitin Machine Works, now known as the Whitinsville shop, located in the village of Whitinsville in the town of Northbridge.

This suburban community near Worcester has a rich manufacturing heritage. The Blackstone and Mumford Rivers run through the Town and in the early 19th century numerous industrial developments were erected along the riverbanks, most notably the Whitin Machine Shop in Whitinsville, at its peak the largest manufacturer of textile machines in the world. The textile machine company and industrial village was written up as one of the Harvard studies of history in business. Northbridge stands as a testament to the success of mill villages throughout the 19th and 20th centuries when production was expanding so greatly that immigrant labor from Canada, the Netherlands and Armenia was imported. Now, these mills stand, mostly renovated into housing and various businesses along the Blackstone River. Home of Lookout Rock, through which the bike trails pass and which overlooks the river below, the outskirts of the valley's community have a number of with horse farms. Today most of the mill buildings are no longer used to full capacity, however, they do offer incubator space to small businesses. Further, most of the Town's architecture developed during the 19th century has been preserved.

Northbridge is part of the Blackstone River Valley National Heritage Corridor Commission and is working with its neighboring communities to "promote the region's special character and sense of history". The Reservoir of the West Hill Dam flood control project and recreation area also lies within the town limits of Northbridge.

Several goals of the town are: "to strengthen the local economy through developing and reusing industrial areas as well as retaining existing businesses"; and, "to keep Northbridge as a desirable place to live through preserving and revitalizing the village centers, maintaining and expanding town services, and protecting natural resources".

According to The Boston Globe, Northbridge was recently named as one of the most 'Bio-Ready' communities in both Massachusetts and New England, making it a "desired location for existing or entrepreneurial businesses such as biopharmaceutical companies, biomedical companies, biodiesel companies, and so-called 'green businesses' such as solar and wind energy companies".

There were 5,896 households out of which 34.1% had children under the age of 18 living with them, 53.8% were married couples living together, 11.1% had a female householder with no husband present, 4.6% had a male householder with no wife present, and 30.5% were non-families. 24.7% of all households were made up of individuals and 9.6% had someone living alone who was 65 years of age or older. The average household size was 2.62 and the average family size was 3.1.

Situated between Interstates 90 (Mass Pike), 146, 395, and 495, Northbridge has highway access to and from major cities such as Worcester, Providence and Boston. Route 146 has a small portion in the town. Also, Route 122 runs along Providence Road.

The nearest commuter rail station into Boston is located in nearby Grafton, approximately 9 miles away. The town is located equidistantly (approx. 10–12 miles) between the Franklin/495/Forge Park T-station and the Worcester T-station, both with ample parking. A section of the Blackstone River Greenway, part of the East Coast Greenway is proposed to cross the town. If completed, the trail would connect the town to Worcester's downtown Union Station, as well as to Woonsocket, Providence, and Newport. The WRTA has weekday bus service to Grafton station, as well as to Millbury, MA.

Historically, Northbridge had trolleys running through some of its village centers, and was on a commuter train line running from Worcester to Providence. The train runs as a freight line currently, however, discussion has begun in Rhode Island and Massachusetts about the possible redevelopment of a commuter line on this route 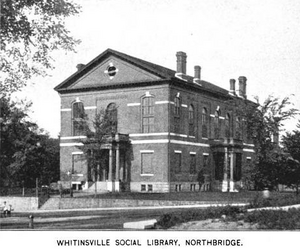 It is a full service community providing a full array of municipal services plus an extensive infrastructure including water and sewer utilities. Local cable TV service is served by Charter Communication, Electricity is provided by National Grid and gas by Nstar/Commonwealth Gas Company.

All content from Kiddle encyclopedia articles (including the article images and facts) can be freely used under Attribution-ShareAlike license, unless stated otherwise. Cite this article:
Northbridge, Massachusetts Facts for Kids. Kiddle Encyclopedia.