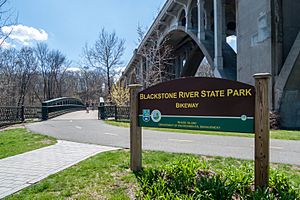 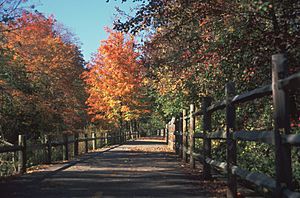 The Blackstone River Greenway (formerly Bikeway) is a partially completed 48-mile (77 km) paved rail-with-trail defining the course of the East Coast Greenway through the Blackstone Valley from Worcester, Massachusetts to Providence, Rhode Island.

As of 2016, approximately 11.5 miles (18.5 km) of the trail has been completed in Rhode Island, connecting the communities of Woonsocket, Lincoln, Cumberland, and Manville. Some 2.5 miles (4.0 km) of completed trail in Massachusetts connect Worcester and Millbury, as well as 3.7 miles of trail connecting Uxbridge and Blackstone.

The path roughly parallels the right-of-way of the active Providence & Worcester Railroad and its predecessor, the Blackstone Canal, running alongside the Blackstone River. In some places, the bike path follows the old canal towpath, with the long-abandoned canal running along one side and the river on the other. Once finished, the greenway will be linked to the East Bay Bike Path, for an additional 14.5 miles (23.3 km) of trail to Bristol, Rhode Island. The Blackstone River Greenway is also a designated section of the East Coast Greenway, the 3,000-mile trail system connecting cities from Maine to Florida.

In 1997, the Rhode Island Department of Environmental Management and Department of Transportation began work on the first Rhode Island segment, from Lincoln to Ashton. This segment was completed in 1998. A second Rhode Island segment was completed in 2002, from Ashton to Manville. In August 2007, a bridge reconstruction project at Martin Street in Lincoln was completed, ending a three-year bike path closure. The new bridge incorporated a major safety improvement with the path passing underneath Martin Street instead of meeting it at grade. In November 2007, a 2-mile (3.2 km) extension from Manville to the Woonsocket Water Treatment Plant was opened. A 1-mile (1.6 km) segment from Lonsdale to Valley Falls, which includes more than 500 feet (150 m) of boardwalk over part of the Lonsdale Marsh, opened in 2008. A segment through the River's Edge Recreational Complex in Woonsocket was completed in 2008, and that segment was linked to the previously-completed portions to the south later that year. In 2011, an 8.5 miles (13.7 km) segment of on-road bicycle lanes opened connecting the Blackstone River Greenway with the East Bay Bike Path, starting in Providence. In 2013, sharrows were painted through Woonsocket from the Massachusetts border to the River's Edge Recreational Complex. In early Summer 2017, a new 0.6 miles (0.97 km) section of path was completed in Providence, stretching from Gano Street to Pitman Street, along the Seekonk River. As of 2017 the bike path is 11 miles (18 km) long, 10 miles (16 km) of which make up the longest segment, and additional segments are under design to extend the path further through Woonsocket toward the Massachusetts border and through the cities of Providence, Pawtucket, and Central Falls. Construction of Section 8C from Cold Spring Park to the Massachusetts border was awarded to John Rocchio Corporation with a $2.8 million bid and a July 19, 2019 substantial completion date.

Construction was delayed due to a lack of state funds, a shortfall attributed to the over-budget "Big Dig" highway tunnel project in Boston. In 2005, as part of the Massachusetts Turnpike-Route 146 interchange project, the first 2.5-mile (4.0 km) segment, from Worcester to Millbury, was opened to the public.

In 2010, an agreement was reached between MassDOT and DCR for DCR to take over the management of the design and environmental permitting of Sections 1 through 5 of the Greenway, including preparation of the Environmental Impact Report (EIR). Section 6 was previously constructed by MassDOT, and Section 7 will be designed by the City of Worcester, and constructed by MassDOT.

In 2013, five bridges in Blackstone that run concurrently with the Southern New England Trunkline Trail (SNETT) were repaired and repainted. These are the two Factory Pond Bridges, the northern Canal Street Bridge, a Blackstone River Bridge, and the St. Paul Street Bridge. By September 2014, these bridges received new ipe wood decks and safety railings. In 2014, new bridges were also constructed over Kane Court and Main Street, and a tunnel was built under Church Street, all in the town of Blackstone. The entire 3.7-mile path was finally completed in December 2016.

All content from Kiddle encyclopedia articles (including the article images and facts) can be freely used under Attribution-ShareAlike license, unless stated otherwise. Cite this article:
Blackstone River Greenway Facts for Kids. Kiddle Encyclopedia.