Whitinsville is an unincorporated village within the town of Northbridge in Worcester County, Massachusetts, United States. Whitinsville is a census-designated place (CDP) and its population was 6,704 at the 2010 census. Whitinsville is pronounced as if it were spelled "White-ins-ville". It was founded by the Whitin family, after whom it is also named. It is a post office jurisdiction, with a ZIP code of 01588. It is located on the Mumford River, a tributary of the Blackstone River.

Whitinsville has been designated as a mill village of national historic significance to America's earliest industrialization, and is one of only four villages selected by the John H. Chaffee Blackstone River Valley National Historic Corridor Commission to receive this designation. Hopedale is the only other Massachusetts mill village to achieve this designation by the corridor commission.

This village was originally Nipmuc Indian lands, and was first settled as part of Mendon in 1662. From 1662 to 1727 it was part of Mendon, then later it became part of Uxbridge from 1727 to 1772. In 1772 Northbridge finally became a separate town. The village's early name was "South Northbridge", before the Whitin family's rise to prominence. Col. John Spring led a militia training company from Uxbridge which fought in the American Revolution. Col. Spring was from the section that became South Northbridge. 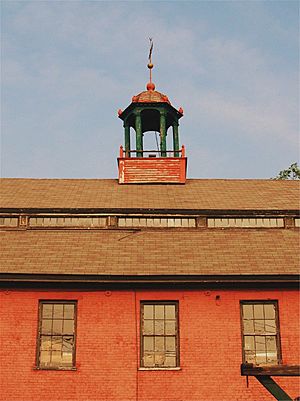 Today a visitor can see much of the original village, including the housing for workers and their families, churches, and the Whitin Community Center. The textile machine company and industrial village were written up as one of the Harvard studies of history in business.

A 1936 Berlin Olympics champion backstroke swimmer, Alice Bridges, then of Uxbridge, trained in the local gym pool (Whitin Community Center) in Whitinsville. The Whitinsville Savings Bank was involved in a precedent-setting case in the U.S., involving tort and contract law, known as "Swinton vs. Whitinsville Savings Bank (1942)". A real estate transaction two years earlier had failed to disclose termites in a building.

The Whitin Community Center, operated by a non-profit organization and commonly called "The Gym", is located at 60 Main Street on what used to be the 11-acre (45,000 m2) John C. Whitin estate. In 1922, four Whitin daughters: Elsa, Katharine, Lois, and Elizabeth, gave the funds to build a gym and pool for the enjoyment of local citizens in memory of their father, George Marston Whitin. This recreation center, known affectionately in earlier days as "The Gym," was one of the finest facilities in the state. Famous for its swim program, it sent swimmers to the 1932 and 1936 Olympics. Devastated by fire in 1959, the Gym was rebuilt with the support of trustees, business and civic leaders, and friends.

The decade of the 1990s was dedicated to expanding and modernizing the Whitin Community Center to prepare it for the 21st century. In 1993 new space was added to strengthen the Center's commitment to child care and adult health and fitness. A new lobby, elevator, racquetball courts completed this expansion phase, and most of the original 1922 building received a comprehensive face lift. In 1995, the Center's three outdoor tennis courts were completely refurbished. Ground was broken in September 1996 for a new state-of-the-art competition sized swimming pool. This new facility opened briefly as an outdoor pool (summer 1998) and then was enclosed for year-round use, reopening in March 1999. A comprehensive project to restore the historic appearance of the Main Street facade was undertaken in 1998-99, funded by individuals, local companies, and the Massachusetts Historical Commission. Also in 1999, the Center's parking facilities were expanded to accommodate the increased business. An ambitious plan to restore and beautify historic Whitin Park (the 7.5 acres behind the Whitin Community Center) was unveiled in early 2000. The nearly 1 mile of stone perimeter walls were rebuilt, repointed and recapped. New walking trails were surfaced, and beautiful park lights and bollards have been installed. In the location of an original Whitin estate building - the rustic teahouse - the Gerry Gaudette pavilion has been built. This open air shelter is used by the Center's child care and summer camp program, along with use by the community at large.

The Whitin Community Center today is a vibrant organization with 4,500 members. The Center also, through its mission, services at least as many non-members. It is a recognized 501 C (3) non-profit organization providing child care and family recreational services. With over 200 families currently served, it is the largest Child Care Center in the Blackstone Valley with a pre-kindergarten school, full day care for pre-schoolers, and a large school age program which provides supervision before and after school, and all day long on school vacation periods.

The Center launched a new Outreach program in 1995, funded entirely by donations, with the goal of bringing together all the children of the community, regardless of neighborhoods, economic status, or whether or not they were Center members. Organized Saturday afternoon activities, open swimming, day trips to museums and baseball games, youth theater, teen dances, and concerts are just some of the many activities. In January 2002 a new facility opened - the Rockdale Youth Center - providing free after school programs and supervision for youngsters ages 8–13. In the fall of 2005, the Center purchased the building housing the program (2219 Providence Road, Northbridge).

The St. Camillus Health Center, originally St. Camillus Hospital for Incurable Diseases, is located at 447 Hill Street on the historic E. Kent Swift Estate named for the husband of one of George Marston Whitin's daughters. The historic mansion on the rear of the estate was restored in 1999 and is now known as Father Turci Manor.

Endowed in 1878 by members of the Whitin family, the 35-acre historic cemetery is located on 241 Linwood Ave. The cemetery was put up for sale by the Pine Grove Cemetery Association in 2011, and is currently owned by the Town of Northbridge.

According to the 2010 United States Census Bureau, the CDP has a total area of 3.64 square miles with 1,840.2 persons per square mile. Whitinsville is a "village" within the incorporated town of Northbridge, Massachusetts. It is located in Worcester County.

The 19th-century expansion of the Whitin mills attracted many Irish immigrant workers, and Irish currently make up 21.4% of the town's population. Other nationalities represented in Whitinsville include Armenian, English, Italian, French-Canadian, and Dutch.

All content from Kiddle encyclopedia articles (including the article images and facts) can be freely used under Attribution-ShareAlike license, unless stated otherwise. Cite this article:
Whitinsville, Massachusetts Facts for Kids. Kiddle Encyclopedia.