Douglas is a town in Southern Worcester County, Massachusetts. The population was 8,983 at the 2020 census. It includes the sizable Douglas State Forest, managed by the Department of Conservation and Recreation (DCR). 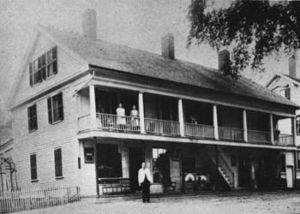 Jenckes Store as it appeared in the 1800s

The name of Douglas was first given to the territory of the town in the year 1746. New Sherburn or "New Sherburn Grant" had previously been its designation, since its first occupancy by the English settlers which was as early as 1715. The original settlers came primarily from Sherburn, although many hailed from Natick as well. New Sherburn was removed from Suffolk County (or Middlesex county?) to Worcester County at its formation on April 2, 1731. The name Douglas was given in 1746, when Dr. William Douglas, an eminent physician of Boston, in consideration of the privilege of naming the township offered the inhabitants the sum of $500.00 as a fund for the establishment of free schools together with a tract of 30 acres (12 ha) of land with a dwelling house and barn thereon.

Douglas's forests gave rise to a woodcutting industry and the Douglas axe company. A woolen manufacturing company, on the Mumford River in East Douglas, in recent times held by the Schuster family, has been prominent in the history of this community. General Lafayette, of France, stopped here during the Revolutionary War, to change horses, on his way to Boston to join General Washington. Lafayette was a hero of the American Revolution and the French Revolution.

The underlying geology consists of rocks rich in quartz, feldspar, and mica. Boulders are plentifully scattered all over town, and gold and silver ores are said to be found in some localities. Large quantities of building and ornamental stone are quarried from the granite ledges found in the center of town which is shipped to almost every section of New England.

Police Chief Patrick Foley of Douglas was elected Vice President of the International Association of Chiefs of Police (IACP), at the annual convention in Denver, Colorado, in 2009.

A common misconception in Douglas is in regard to the New England Trunkline Trail. Many believe that railroad tracks were laid here for commuting from northern Connecticut to northern Massachusetts. In fact, they were used to haul ice from Wallum Lake as interstate commerce. Today you can hike these trails through Massachusetts and Connecticut. The New England Trunkline was originally planned as a railroad, but the financier died in the sinking of the Titanic. 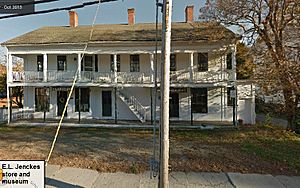 The E.L. Jenckes store and museum sits on Main Street in the village of East Douglas. Ebenezer Balkcom opened a small store at the corner of Main and Pleasant (now Depot) streets during the 1830s, when East Douglas was becoming the economic center of the town. The store changed hands (sold to Gardner Chase) until he retired and sold the building to Edward L. Jenckes. After Jenckes death in 1924 is daughters E. Mialma and Helen R. continued to run the show until the store closed its doors in 1964. The store remained closed until 1972 when the property was donated to the Douglas Historical Society, where it was carefully restored to its original general store appearance of 100 years ago.

Douglas is bordered by: 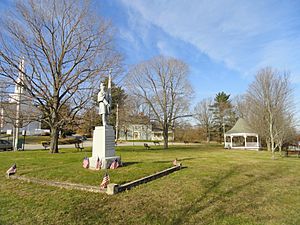 There were 2,476 households, out of which 43.1% had children under the age of 18 living with them, 66.6% were married couples living together, 8.1% had a female householder with no husband present, and 21.8% were non-families. 17.3% of all households were made up of individuals, and 6.7% had someone living alone who was 65 years of age or older. The average household size was 2.85 and the average family size was 3.23. 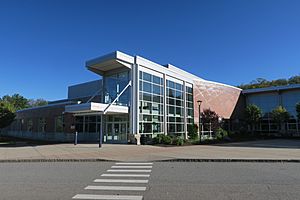 Douglas is also a member of the thirteen towns that make up Blackstone Valley Regional Vocational Technical High School which provides educational opportunities for students grades 9–12 seeking experience and education in a specific career field.

All content from Kiddle encyclopedia articles (including the article images and facts) can be freely used under Attribution-ShareAlike license, unless stated otherwise. Cite this article:
Douglas, Massachusetts Facts for Kids. Kiddle Encyclopedia.