The Cedar River is a river in the U.S. state of Washington. About 45 miles (72 km) long, it originates in the Cascade Range and flows generally west and northwest, emptying into the southern end of Lake Washington. Its upper watershed is a protected area called the Cedar River Watershed, which provides drinking water for the greater Seattle area.

The upper Cedar River watershed is a protected area called the Cedar River Municipal Watershed. About 90,000 acres (364 km²) in size, it is owned by the City of Seattle. The Cedar River Watershed provides drinking water for 1.4 million people in the greater Seattle area. About two-thirds of King County uses water from the Cedar River Watershed, over 100 million US gallons (380,000 m3) per day. The reservoirs and pipeline infrastructure is owned and operated by Seattle Public Utilities. Public access is restricted and the area is managed as a wilderness in order to protect water quality.

Chester Morse Lake is the main storage reservoir of the Cedar River Watershed system. Pipelines route water to the Seattle area from Landsburg, at the western edge of the protected watershed area.

The upper Cedar River flows through a region of deep and porous glacial outwash. A large amount of water seeps into the ground, forming an aquifer. Most of this underground water eventually returns to the surface as springs, flowing mainly into the Cedar River as well as the Snoqualmie River and Rattlesnake Lake. This process acts as a kind of natural water filtration system. As a result, the Cedar River is one of the few rivers in the United States used for drinking water without requiring specially fabricated filtration.

Just south of the Cedar River Watershed is a similar protected area used for drinking water: the Green River Watershed, which supplies water to the greater Tacoma area.

The watershed also has an education center where visitors can learn about the issues that involve the region's drinking water, forest and wildlife.

The river has problems with invasive species, erosion, and pollution from adjacent properties and runoff. In 1996, the Friends of the Cedar River Watershed was formed to organize community involvement in protection of the river and its tributaries. The organization focused on education and ecological restoration. The three main programs The Friends of the Cedar River Watershed managed were the Cedar River Salmon Journey, Volunteer Habitat Restoration, and Stewardship in Action. The organization disbanded in 2015, and its programs were absorbed by other entities to continue the work in advocacy and education. 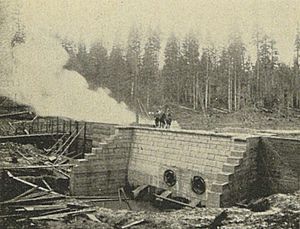 Headworks intake and wing dam on the Cedar River, 1900, part of the Seattle water supply system. 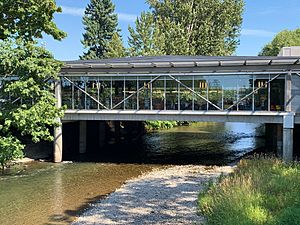 Efforts to use the Cedar River as a water source began in the 1890s. A dam was built at Landsburg and water diverted into a 29-mile (47 km) pipeline. The pipeline sent water to Seattle's Volunteer Park and Lincoln reservoirs on Capitol Hill. The first deliveries occurred in 1901. A second pipeline was built in 1909 and a third in 1923.

Another reservoir was constructed in the early 1900s by the City of Seattle on an ancient glacial lake bed. The city constructed a ninety-foot concrete dam and used bedrock to the west and a glacial moraine to the east as natural barriers. The reservoir was known as the Cedar Reservoir and was fed by the Cedar River Drainage. Between the hours of 12AM and 2AM on December 23, 1918 a large section of the Cedar Reservoir failed and spilled between 800,000 and 2,000,000 cubic yards of water. The discharge flowed down Boxley Creek Valley, destroying the town of Edgewick, sawmills (owned by North Bend Lumber Company), and parts of the Milwaukee Railroad. The failure did not occur at the dam, but 6,000 feet on the moraine side of the reservoir. Initial discharge rates were estimated between 3,000 and 20,000 second-feet.

Due to logging in the early 20th century, only about 17%, or 14,000 acres (57 km²), of the Cedar River Watershed consists of old growth forest. The majority of the forest remaining today is second growth forest.

The Cedar River Watershed provides habitat for a variety of wildlife. The river provides habitat for anadromous fish including Chinook salmon, Coho salmon, Sockeye salmon, and Steelhead trout. Deforestation and associated erosion in the early 20th century resulted in a degraded habitat for wildlife. Starting in the late 20th century efforts began to be made to protect and restore the river and its watershed. Salmon runs have been a major topic of concern, with work underway to recreate spawning channels, proper salmon habitat zones, and fish ladders.

All content from Kiddle encyclopedia articles (including the article images and facts) can be freely used under Attribution-ShareAlike license, unless stated otherwise. Cite this article:
Cedar River (Washington) Facts for Kids. Kiddle Encyclopedia.