Kent is a city in King County, Washington, United States. It is part of the Seattle–Tacoma–Bellevue metropolitan area and had a population of 136,588 as of the 2020 census, making it the fourth-largest municipality in greater Seattle and the sixth-largest in Washington state. The city is connected to Seattle, Bellevue and Tacoma via State Route 167 and Interstate 5, Sounder commuter rail, and commuter buses.

The Kent area was first permanently settled by westerners in the early 1860s along the banks of (what was then) the White River, and originally called Titusville. (There is still a 'Titusville Station' sign on Gowe Street near First Avenue.)

During the 1880s the town discovered hops production as the major source of income. Due to an aphid invasion which affected hops crops in Europe, hops from the Puget Sound area were commanding high prices. Hops were shipped from Titusville either by the river or via rail. In 1889 the town was renamed for the County of Kent, the major hops producing region in England. Hops production in the White River valley came to an end soon after its own invasion of aphids in 1891.

Kent was officially incorporated on May 28, 1890 with a population of 793, the second city incorporated in King County. Seattle was the first.

After the turn of the 20th century the area turned to dairy farming, and was home to a Carnation Condensed Milk plant. Flooding from both the Green and the White Rivers was a constant problem. In 1906, flooding changed the course of the White River, which reduced the flood hazard by half. The Green River continued to present problems until the creation of the Howard A. Hanson Dam at Eagle Gorge in 1962.

During and after the Great Depression, Kent was known as the "Lettuce Capital of the World." After WWII, Kent began to grow more rapidly. From 1953 to 1960 the city's size grew twelve-fold. In 1965 Boeing began building in Kent, followed a few years later by other aerospace and high-tech companies.

In 2009, Kent got its first sports team when WHL's Seattle Thunderbirds moved into the ShoWare Center.

Kent is divided into three major regions: East Hill, the Valley, and West Hill. Downtown Kent is located on the east side of the valley; the rest of the valley is almost entirely covered by warehouses. There is a good view of Mt. Rainier to the southeast.

Nearby cities include Renton and Tukwila to the north, Covington and Maple Valley to the east, Auburn to the south, and Federal Way, Des Moines and SeaTac to the west. 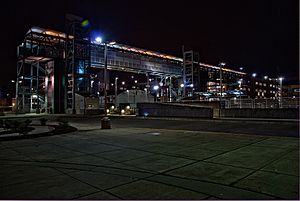 Kent Station during the night.

There are several major freeway and highway in or near Kent, including Interstate 5, State Route 167, and State Route 516, and, as a result, a much greater traffic density during rush hour. Kent is also central to King County Metro transit, with the Kent Station providing service to many destinations, including downtown Seattle by multiple commuter buses, the Sounder Commuter Rail, and local bus service. Heavy rail service includes two major north-south lines through the Kent Valley, with freight traffic operations by the BNSF and Union Pacific railroads.

Kent's extensive park system includes 73 parks, miniparks, playfields, skateparks, greenbelts, and other related facilities. These parks range in size from as little as 4,300 square feet (400 m2) to over 160 acres (0.65 km2).

Kent has designated the following landmarks:

In 2003, Kent was named Sports Illustrated's Sportstown of the year for Washington. In January 2006, a major new entertainment center, known as Kent Station, opened in downtown Kent adjacent to the transit station of the same name.

The 2012 Skate America figure skating competition was held in Kent from October 19 to 21, 2012, at ShoWare Center. 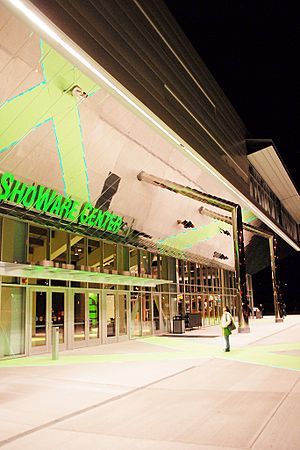 Kent has the following sister cities:

The economy of Kent consists of commuters traveling to the main urban centers of the Seattle metropolitan area (particularly downtown Seattle), extensive manufacturing and warehousing within the city, and retail/personal services catering to residents. Kent's manufacturing and distribution area ranks are the 4th largest in the United States.

Corporate headquarters in Kent include Oberto Sausage Company, Seattle Bicycle Supply, Omax Corporation and aerospace manufacturer Blue Origin. Amazon, Boeing, Whirlpool and General Electric operate sizable facilities in the city. Due to its central location within the metropolitan area, Kent is home to a large and growing warehouse district. To honor the 100th anniversary of Oberto Sausage Company's presence in the city, the city designated a section of South 238th Street as Oberto Drive in May 2018.

Boeing Kent Space Center was opened with a public dedication ceremony on October 24, 1964. Keynote speakers at the event were William "Bill" Allen, Chairman and CEO of The Boeing Company; future Washington Governor Dan Evans; and Alex Thorton, Mayor of the City of Kent. The event featured public tours of the labs and facilities that were used to build the Lunar Roving Vehicles used in the Apollo program.

Kent is home to a large steel industry dating back to the early 20th century. Steel and metal manufacturers include:

According to the city's 2018 Comprehensive Annual Financial Report, the largest employers in the city are:

All content from Kiddle encyclopedia articles (including the article images and facts) can be freely used under Attribution-ShareAlike license, unless stated otherwise. Cite this article:
Kent, Washington Facts for Kids. Kiddle Encyclopedia.