The National Soccer Hall of Fame is a private, non-profit institution established in 1979 and currently located in Toyota Stadium in Frisco, Texas, a suburb of Dallas. The Hall of Fame honors soccer achievements in the United States. Induction into the hall is widely considered the highest honor in American soccer.

The Hall of Fame was founded in 1950 by the Philadelphia "Old-timers" Association, a group of former professional and amateur soccer players that wanted to recognize the achievements of soccer in America. 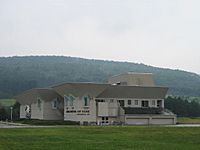 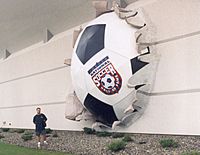 The Hall of Fame museum opened on June 12, 1999 in Oneonta, New York. The museum featured the hall of fame, a library, and an interactive soccer play area. The United States National Soccer Team Players Association partnered with the Hall of Fame to create the Time In program, which honored people with a connection to soccer battling leukemia. Since the disease disproportionately targets children a majority of the honorees were youth soccer players.

Prior to the 2005 induction of the "Magnificent Five" individuals from the early and mid 20th century had been largely ignored. This change was brought about by the acquisition of a large volume of historical records relating to this period. These records combined with previously developed eligibility criteria led to the induction of Tommy Fleming, Alex McNab, Johnny Nelson, Werner Nilsen and Fabri Salcedo. The notable careers of these five players all took place prior to 1950. The "Magnificent Five" were inducted posthumously into the Hall of Fame in August 2005.

Sports Illustrated reported on September 4, 2009, that the Hall announced it would be closing to the public. It was open only on certain match days. As a result of financial difficulties the Hall of Fame cut six of its nine employees during that same month. The director of the Hall of Fame for almost 10 years, Jack Huckel, left his position on December 18, 2009. On February 10, 2010, it was announced that the Hall would close its facility, though inductions will continue.

In September 2015, it was announced that a new Hall of Fame museum would be built at Toyota Stadium in Frisco, Texas, the home of Major League Soccer club FC Dallas. The new museum opened during the 2018 Enshrinement Ceremony on October 20, 2018. This new facility features additional memorabilia from soccer legends and high-tech, interactive exhibits. 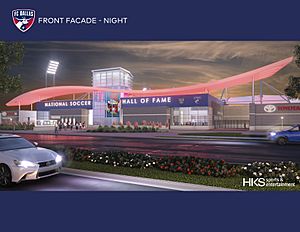 Rendering of the future building for the National Soccer Hall of Fame in Frisco, Texas. The expected opening is October 20, 2018. Image release by Hall of fame.

After the museum was closed, a collection of more than 80,000 items was distributed to various locations across the country, including the headquarters of Eurosport, a long-term corporate sponsor, in Hillsborough, North Carolina. The collection includes the following notable items:

Eligible individuals may be inducted into one of three categories: Player, Builder and Veteran (player). New individuals are inducted annually.

To be eligible in the Player category, an individual must have met number 1, and either number 2 or number 3, of the following three criteria:

Players who have met either no. 2 or no. 3 but who retired more than 10 years ago are automatically placed on the veteran eligibility list.

To be eligible in this category, an individual must have made his or her mark in soccer in a non-playing capacity and have had a major, sustained and positive impact on soccer in the United States at a national or first division professional level. Due to the broad, general nature of the criteria, nominations for this category may be considered. Nominations are screened by the Hall of Fame Historian and Researcher who submit their recommendations to the Hall as to the appropriateness of the nominee's inclusion on the eligibility list.

The National Soccer Hall of Fame's Medal of Honor is the highest honor given to people who have grown the sport of soccer in the United States. The Medal is awarded to individuals who has "demonstrated vision and played an historic role in changing the course of soccer in America." The Medal has been given out only four times in history.

In 2009, the Hall of fame inducted Jeff Agoos and Joy Fawcett into the Hall of Fame in the player category.

In 2010, Thomas Dooley and Preki Radosavljević were inducted in the player category, Kyle Rote, Jr. in the Veteran category and Bruce Arena in the Builder category.

On January 31, 2012, the United States Soccer Federation announced that the ballots were finalized for the Class of 2012. Voting began on the day of the announcement and will continue until February 17. Twelve players were added to the ballot after qualifying for the first time. They included Tony Meola, Claudio Reyna, Jose Burciaga Jr., Ronald Cerritos, Lorrie Fair, Jennifer Lalor, Ronnie O'Brien, Ante Razov, David Regis, Thori Staples Bryan, Greg Vanney and Kerry Zavagnin. Of the remaining nine players in the pool, Mike Burns, Peter Nowak, Carlos Valderrama and Peter Vermes are in their final year of eligibility.

On February 29, 2012, the USSF announced the induction of Tony Meola, Claudio Reyna, Tony DiCicco, and Desmond Armstrong into the Hall of Fame. Reyna and Meola greatly exceeded the two-thirds threshold required to enter the Hall, receiving 96.08% and 90.20% of the vote respectively.

On October 11, 2013, the USSF inducted two former U.S. international and MLS stars into the Hall of Fame. Forward Joe-Max Moore and the versatile Peter Vermes were the only players inducted in 2013.

On August 3, 2017 former U.S. Women's National Team goalkeeper Briana Scurry, and Joe Machnik were elected to the National Soccer Hall of Fame in the player and builder categories respectively.

On May 31, 2018, five new Inductees were announced Cindy Parlow, Brad Friedel, Tiffeny Milbrett, Bob Contiguglia, Don Garber (Deferred from 2016). The 2018 class will be the first class enshrined at the new facility in Frisco, TX.

Named after the official historian of the National Soccer Hall of Fame from 1997–2007. Jose is recognized internationally as the preeminent authority on the history of soccer in North America. The award itself honors members of the media whose contributions to soccer in the United States are deemed to be of an "exceptional and sustained" quality.

The MLS Hall of Fame Game was an annual friendly match between two MLS teams. It corresponded with the induction of the National Soccer Hall of Fame. The game took place at At-A-Glance Field in Oneonta, NY.

All content from Kiddle encyclopedia articles (including the article images and facts) can be freely used under Attribution-ShareAlike license, unless stated otherwise. Cite this article:
National Soccer Hall of Fame Facts for Kids. Kiddle Encyclopedia.