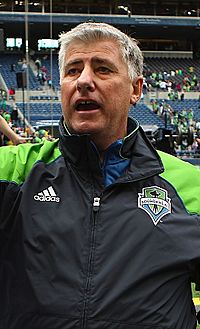 Schmid was hospitalized several times during his later career, including with pneumonia in 2009. He had weight and heart issues that later lead to his decision to retire from the LA Galaxy in 2018.

Schmid was hospitalized again on December 10, 2018 in intensive care at Ronald Reagan UCLA Medical Center in Los Angeles. He died on December 25, 2018 from heart failure while waiting for a heart transplant, at the age of 65.

All content from Kiddle encyclopedia articles (including the article images and facts) can be freely used under Attribution-ShareAlike license, unless stated otherwise. Cite this article:
Sigi Schmid Facts for Kids. Kiddle Encyclopedia.