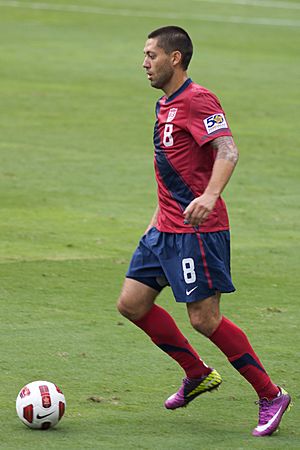 Clint Dempsey (born March 9, 1983) is an American footballer from Texas. He plays for Sounders F.C.and is number 2 and, has also played for Fulham F.C. and was number 8. He played for the New England Revolution in the United States before Fulham gave them money (a transfer fee) to get him to play for them, but then was put on Sounders F.C. Dempsey is a good player who is well liked by many people in the United States and England for his hard work and desire to win.

Clint also has taken an interest in rapping. Known as Deuce, he has produced compilations with Big Hawk and XO. He also once defeated Peter Crouch in a freestyle battle.

All content from Kiddle encyclopedia articles (including the article images and facts) can be freely used under Attribution-ShareAlike license, unless stated otherwise. Cite this article:
Clint Dempsey Facts for Kids. Kiddle Encyclopedia.