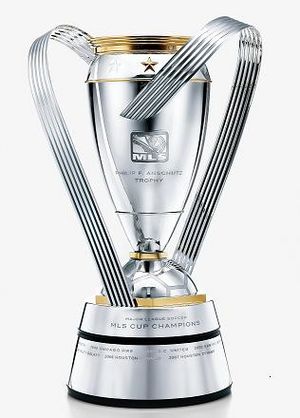 The Major League Soccer Cup (usually called the MLS Cup) is a tournament that determines the MLS Champion. The tournament is also the highest a team can get in American soccer. The current champions are Sporting Kansas City. The most successful clubs have been D.C. United and the Los Angeles Galaxy, each with four titles.

The MLS Cup was founded in 1994, and the cup is every year. The first champions ever were D.C. United.

All content from Kiddle encyclopedia articles (including the article images and facts) can be freely used under Attribution-ShareAlike license, unless stated otherwise. Cite this article:
MLS Cup Facts for Kids. Kiddle Encyclopedia.